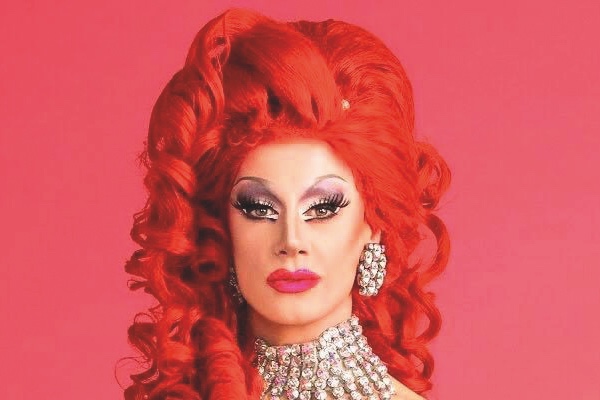 Jason Reid puts 10 questions to seasoned British drag queen and Drag Race UK favourite, Divina De Campo – a consummate queen through and through who is currently part of a star-studded UK tour of Chicago: The Musical. They’ve also proven time and time that they’re much more than just a red wig and a silver dress with their outspoken views on politics and LGBTQ+ issues

Congrats on the Chicago gig! Apart from the essentials, what will you keep in your dressing room?

It’s an actual dream come true for me. In my dressing room I will keep a steamer, my brush roll, some lemon and ginger teabags, and a LOT of moisturiser. I don’t really have a great deal of mementos/keepsakes; I’ve got my wedding ring, a Tiffany bracelet that my husband Paul bought me, and a little Hounds for Huntington dog which raises awareness of Huntington’s disease. I take that with me wherever I go and take pictures with it.

My art absolutely intertwines with my activism because most of what I’m making is about queer people and our experiences in the world… and also just a bit of filth and fun. I do have to rein in the activism side of stuff from time to time because otherwise people think oh she’s just gonna be a boring miserable cow, whereas most of what I put onstage is about having a good time.

In your opinion, what are the greatest challenges facing LGBTQ+ people today, and how can we overcome them together?

The biggest threat to LGBTQ+ people at the moment is the concerted effort from the mainstream media and from the evangelical church and far right, to separate the T from the LGBT. It’s no surprise that there has been an astronomical rise in hate crimes against gay people after we’ve had three to four years of concerted vilification of trans people. Bigots don’t care about your identity, they just care that you’re different. What’s happening is, you are making us all a target. All of us!

Which queer person from history would you most like to have met?

I think I would like to have met Freddie Mercury. An apologetic bisexual icon.

What advice do you think Drag Race fans need to hear?

The advice that the Drag Race fans need to hear is that… it’s an entertainment show! A SHOW! It’s not reality. People on the show are just doing their thing. You can have your feelings and thoughts about it, you can even put those online, what you don’t need to do is tag those people or write negativity on their posts. You don’t need to put that out into the world. It’s not that serious, it’s drag.

“I do have to rein in the activism side of stuff from time to time because otherwise people think oh she’s just gonna be a boring miserable cow, whereas most of what I put onstage is about having a good time”

Who are your living role models?

Kristin Chenoweth and Dolly Parton. Most of my role models are personal ones; my singing teacher from school, my dance lecturer, and a few other teachers – those are the people who have done amazing, incredible things in my life and then been really generous with their time

If there was a general election tomorrow, how would you vote?

At this moment, honestly, I don’t know. There is such a swathe of anti-LGBTQ+ sentiment in so many of the parties right now, and I don’t see that much clear leadership from those at the top. The people who are supposed to come in and tear apart the corrupt system that’s currently in charge have not done that. I just don’t see any of that happening with who’s there at the moment. So, I don’t know who I’d vote for. Not Tory.

What are the three most important things that you think politicians need to focus on in order to create a fairer and more equal society?

OK, this is hard. I think the first thing that needs to happen is tax reform, and by that I mean we need to tax people who earn lots and lots more money than people who don’t. Whenever anyone talks about America’s golden age, when society was booming and people’s life chances were good, taxation was higher – more like 70%. It was a lot. But those people at the top can afford to pay more, and that’s how society is built.

“The biggest threat to LGBTQ+ people at the moment is the concerted effort from the mainstream media and from the evangelical church and far right, to separate the T from the LGBT”

Then for society to be fairer, once there is evidence that a politician has lied – and it’s not a one-off – they should be removed from office. And it should be a an independent body that is in charge of that, rather than the Prime Minister being in charge of the Ministerial Code (of conduct). The reason it should be an independent body is so that when people like the Prime Minister lie they are actually held to account. At the moment that’s not happening. We have people who are not held to account at all, and they’re shitting over the rest of us.

If you could only read one book, watch one film, and listen to one album for the rest of your life, what would you choose and why?

My one book would be The Secret by Rhonda Byrne – sometimes I have a lot of negative thoughts in my head. I’m not a negative person but now and then I have this spiral of negativity about myself. The Secret just helps to reorientate that for me, and remember that those things are not real and to think about the things that I want rather than the things that will go wrong.

My film would be Lord of the Rings – it’s got Sir Ian McKellen, wizards, elves, beautiful people, and bits of comedy.

The album choice is really hard because I’d like to say a Kate Bush album, BUT it will probably be Stripped by Christina Aguilera – it’s a brilliant album, crafted perfectly.

Hopefully as someone who used their voice for good things. I’m not always right and I’m more than happy to hold my hands up and admit when I get something wrong, and take accountability. I think taking accountability is super-important. And a filthy cow who was always up for a laugh.

Divina De Campo stars in the UK tour of Chicago until November 20.

For more info on upcoming events, gigs or performances from Divina check out their website www.divinadecampo.com