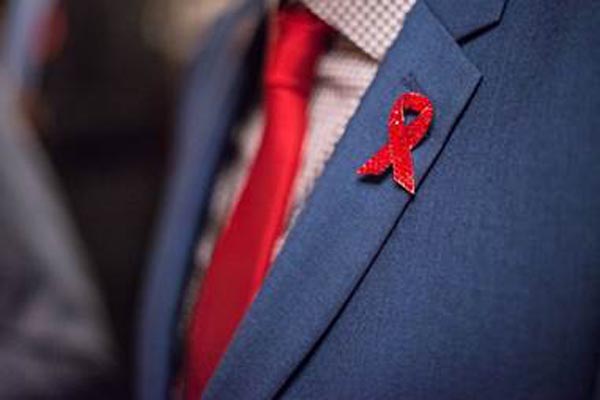 Their YouGov survey of 2,049 people found that 20 per cent of British adults would feel uncomfortable wearing a red ribbon on this day to show support and raise awareness of HIV.

Shockingly, over a third (34 per cent) of these respondents said this was because they wouldn’t want other people to think they have HIV or AIDS.

This comes despite the news that people diagnosed with HIV have – for the very first time – the same overall mortality rate as the general public.

New Public Health England figures released this month show rates of undiagnosed HIV remain unacceptably high, with 1 in 8 of all people living with HIV unaware they have the virus. This is bad for their health and increases the likelihood of them unwittingly passing on HIV.

However, it was a better picture among the gay community, as just 5 per cent of gay people felt uncomfortable wearing the ribbon, compared with 22 per cent of heterosexuals.

Ian Green, Chief Executive of THT, said: ““Incredible medical advances have been made since our namesake Terry Higgins was one of the very first to die of an AIDS-related illness 35 years ago. An HIV diagnosis used to be a death sentence but that’s no longer the case.

“Today the UK is closer than ever to beating HIV with an 18 per cent drop in new diagnoses in the UK – the first significant decline since the very start of the epidemic. But we won’t achieve this ambition until we stamp out HIV stigma for good.”

His Royal Highness Prince Harry has committed to tackling the stigma that surrounds HIV and proudly wears a red ribbon.

Speaking recently at the opening of THT’s pop-up shop in Hackney, Prince Harry said: “We mustn’t be complacent. We’ve got everything here: all the equipment, all the testing ability. We owe it to this generation to be able to eradicate this once and for all.”

HIV treatment works by reducing the amount of virus in the blood to undetectable levels, which protects the immune system from damage. This also means that those on effective treatment can’t pass it on to sexual partners.

To show the extent of HIV stigma that still exists in 2017, THT have released a video with real messages sent to people living with HIV on dating apps.

The messages, echoing comments often associated with the 1980s, were all received by people living with HIV this year and highlight the stigma and misinformation that prevails around the long-term condition.

He said: “Over the past 30 years we have come a long way but it is completely unacceptable that in 2017 there is still a stigma associated with HIV. The red ribbon of World AIDS Day should be seen as a symbol of unity and the excellent progress we’re making towards eliminating HIV infections and HIV associated deaths.”

Over in the City of London, the Bank of England marked the day by lighting up its Threadneedle Street building red as a symbol of support for all those affected by HIV.