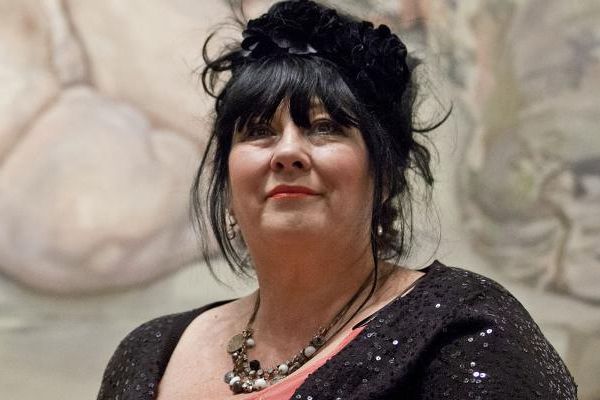 Sue Tilley became a celebrity in the art world when Lucian Freud painted her. Benefits Supervisor Sleeping (1995) depicts Sue nude on a sofa. The painting was later sold to Roman Abramovich for £17 million.

As well as being a muse to Freud, Sue was best mates with fashion icon Leigh Bowery. She was later depicted in Boy George’s musical Taboo. As Taboo turns twenty, we caught up with Sue to discuss her life with Leigh Bowery, partying in the 80s and becoming an artist in her own right.

What went through your mind when you first saw the musical Taboo? “I was very excited and I couldn’t believe I was in it. I saw a dress rehearsal and I was thrilled. It brought back the 80s.”

How did you meet Leigh Bowery? “At the back of Heaven there was this club called Cha Chas. You had to go down a dirty alley to get there. I was friends with Stephen Luscombe from Blancmange. He took me one evening and my eyes fell on Leigh. He wasn’t dressed freaky then. Well, I suppose some people would think he was. We started talking and that was it, we were friends for life.”

Did you get the sense that he was destined for great things? “Not really. Maybe a little bit, but I never imagined he’d become as famous and as special as he did. He wanted world domination.”

Leigh had been working at Burger King before he met Sue. “He told me all about it. He was mortified when they tried to make him the manager. That was it, he knew he had to leave. Some people can turn their hand to anything, even working in Burger King. It wasn’t really the career path he wanted. Imagine now, he could have been the Managing Director of Burger King.”

When did he develop the look he became famous for? “A year after we met, if that. He lived near Brick Lane. There were a lot of fabric shops selling cheap stuff around there. He put together this look but he was too shy to wear it. So, he put it on his flatmate Tojan. When Trojan wore it a few times Leigh saw how much attention he got, so he started wearing it himself.”

The clothes weren’t made with much of a budget. “Some of the fabrics cost 50p a yard. He made me a lovely gauze dress, but because the fabric was so cheap it dragged along the floor. Also, it was very nasty if a cigarette got anywhere near you: up they went up in flames because they were so synthetic.”

Did he set out to be a designer? “Anything that made him world famous. He got famous for lots of things but it wasn’t really of his own accord. Like when he worked for Michael Clark’s dance company. He wasn’t in charge, you see, although he tried to be.”

How did his club night Taboo emerge? “Tony Gordon found the club in Leicester Square. I’d never been there, I don’t think anybody had. So Tony arranged it and asked Leigh if he’d like to host it with him. Obviously Leigh took over and took the credit for everything.”

Taboo developed a reputation for being very hedonistic. “Oh yes, you could do whatever you wanted. You’d go down the stairs and suddenly you were in a wild playground of misbehaviour.”

Were you working at the job centre by then? “I was. I had this bizarre life. A lot of the regulars at Taboo came and signed on with me.”

Leigh also started his own band Minty. “Their performances were always great, but something always went a bit wrong. Like the performance at The Fridge when he decided to have an enema.” Let’s just say there were scenes.

“There was a letter of complaint in a gay magazine. It was supposed to be from two lesbians who were horrified but Leigh had written it himself. Leigh was such a joker, anything he could do to entertain.”

He would have thrived with social media and Youtube. “I know, he’d be perfect. He might explode from all the attention. Just before he died I was getting my first computer, we didn’t have mobile phones or anything. He was 33 when he died.”

“He did so much with the time he had. Before Leigh found out he had AIDS he’d have some days when he was so hungover he just laid on the sofa. We’d be on the phone chatting. But after he found out he was ill he worked every day. He knew he didn’t have time to waste.”

Did he get the credit he deserved in his lifetime? “He got the attention but he never had any money. He said you shouldn’t judge life by money but through what you achieve and your experiences. He was always doing something.”

Sue recently launched her own career as an artist. “I did train to be an art teacher. I later posed for Lucian but I forgot about drawing, really. Then there was an exhibition at the National Portrait Gallery of Lucian’s works and they wanted me to model. I met a guy who did art classes in Bethnal Green. I went to one and I realised I could still draw. I’m not as dedicated as Leigh but if I turn my hand to something I can usually do it.”

Sue now lives in St Leonards-on-Sea. “I went to visit a friend in Hastings and came here, we went to Kino-Teatr on Norman Road. I thought ooh, it looks nice here. I’d never dreamt of leaving London. I saw people who looked a bit quirky and thought, I could be friends with them. I looked on Rightmove and realised I could sell my grotty flat in Bethnal Green and get a magnificent one here. So two days later I put my flat on the market. Suddenly I’m moving to a place I’ve only visited once where I only know two people. I’m not usually that kind of person but it’s the best decision I’ve made.”

You’ve made it look like an artist’s house. “I love my flat. There’s some amazing second hand furniture shops around here. I threw my Ikea stuff away and bought vintage. Things I’d always wanted but never had. And when I was 60 I got it, so don’t give up on your dreams.”

How would you sum up Leigh’s legacy “An inspiration to everyone of how to live your life. Don’t be scared and do what you want to do. If people don’t like it just carry on.”

Popstacular, an independent collective group of designers, artists, illustrators and artistes bringing limited-edition apparel, accessories and homewares, will be opening a shop in The Lanes, Brighton before Christmas with many of Sue’s designs.

Boy George’s award-winning musical Taboo returns for one night only on January 30, 2022 at the London Palladium to celebrate the 20th anniversary of the show’s original production. This star-studded charity concert, featuring members of the original cast, is in aid of Terrence Higgins Trust and Shelter.