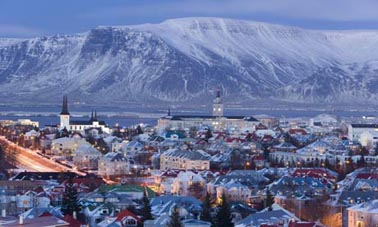 Tourism chiefs in Iceland work very hard to encourage LGBT travellers to visit the country all year round. In 2012 Reykjavik hosted the Gay Aquatic Championships, and the city is one of the front runners in bidding to stage the World OutGames in 2017.

Gay people in Iceland are equal in the eyes of the law and have enjoyed equal marriage rights in church since 2010. The country boasts the world’s first openly lesbian Prime Minister and every August one third of the total population of Iceland turns up in Reykjavik to celebrate Reykjavik Gay Pride. It is truly a welcoming destination for the LGBT tourist.

Outside of the main Pride event there are two other annual LGBT events:

Bears On Ice every September when ‘Bears’ from all over world descend on Reykjavik for four days of fun including a bear ‘love-in’ at the famous Blue Lagoon and the Rainbow Reykjavik Winter Festival which runs from January 31- February 3 2013.

Rainbow Reykjavik Winter Festival
Due to Iceland’s location halfway between the US and Europe, LGBT events attract a good mix of nationalities.

Activities on offer during the up coming Rainbow Winter Festival include:

• A visit to the Blue Lagoon, one of the 25 wonders of the modern world followed by dinner at the Lava Restaurant in the Lagoon complex

• A Golden Circle Tour visiting the waterfalls at Gullfoss, the hot springs and spectacular geysers at Geysir and the stunning Pingvellir National Park.

• You will visit the Laugavatn Fontana Health Spa and sit in wooden steam sauna cabins built directly on top of hot natural springs and then soak outside in hot water baths drawn from the springs. This new modern spa is a must do for first time visitors to Iceland. It is relaxing and overlooks a lake which at the edges is heated by the hot springs. Fresh bread is baked daily in the hot volcanic mud. Make sure you try some at the spa cafe. It is unique, healthy and very tasty.

• A Pink City Walk round Reykjavik includes a visit to the Penis Museum. You will have plenty of time to see the mainstream tourist sights such as Hallgrimskirkja the space age Lutheran Cathedral, the new Harpa Concert Hall, the Hofdi House, location for the 1986 cold war summit between Presidents Reagan and Gorbatsjov and you will witness the national sport of Glima (folk wrestling) in action.

• Weather permitting a Northern Lights Hunt is planned to see the spectacular natural phenomenon knows as the Aurora Borealis.

• The festival weekend closes with a midnight Pink Party on Saturday, February 2.

Fully inclusive package are available at: Rainbow Reykjavik with options available to extend your trip for a few days to take in a whale watching trip and a full day glacier cruiser snowmobile tour.

You might also want to visit Iceland’s second city Akureyri situated on a Fiord on the north coast of the Island.

Where you stay is an important element of any trip away to attend any gay happening, as everyone wants to be at the centre of all the planned events.

The Hilton Reykjavik Nordica, just slightly out of the centre of the city but only minutes from all the attractions, has a corporate feel, a world class NordicaSpa and superb restaurant called VOX.

The Icelandair Hotel Reykjavik Natura in the grounds of the domestic airport and close to the city centre has recently been refurbished to a very high standard. The zen style Soley Natura Spa is relaxing and well worth a visit and the restaurant called Satt is first class and a popular choice for brunch by both tourists and business people. The hotel has a wonderful take on Art Deco and 50s feel. All guest rooms are bright and spacious and the hotel is decorated with paintings, sculptures and videos by contemporary Icelandic artists.

The groups newest hotel, the Icelandair Hotel Reykjavik Marina is situated in the Old Harbour district. This former paint factory has bustling public areas where locals are welcome to mingle with the guests. The fitness centre is situated unusually in the main lobby. There is a modern contemporary cocktail bar called Slipp and a fine cafe areas serving breakfast, lunch and dinner. The hotel has a good variety of bedrooms, some with balconies and if you really want to treat yourself there is an impressive private suite on the third floor. You walk out the front door of the hotel onto the Old Harbour, where the ships are literally at your fingertips.

If you venture out of Reykjavik in search of the Northern Lights visit the Icelandair Hotel Fludir in the beautiful Fludir countryside close to the natural wonders of Gullfoss, Geysir and Pingvellir. The hotel bedrooms are designed round a central courtyard where you can relax in hot tubs and watch the Northern Lights. The hotel has a first class restaurant serving the best lobster I have ever tasted and specialises in locally raised beef.

Arts FEATURE: The queer history of architecture and design