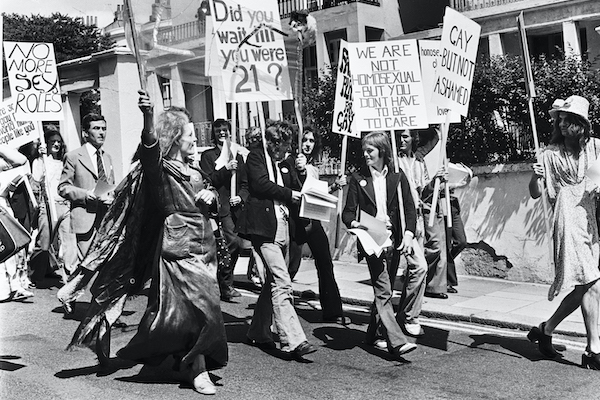 After Gay Brighton Past found a trove of never-used pictures from the original 1973 Gay Pride march in Brighton, Alf Le Flohic managed to track down some of the people involved and get their stories.

On the afternoon of Saturday, July 7, the Sussex Gay Liberation Front (SGLF) and friends met in Norfolk Square off the Western Road in Brighton. As you can see in some of the pictures, they marched down Western Street to Embassy Court on the corner with the Kings Road, on past the Kings Hotel and finished at the Old Ship Hotel. With banners held aloft they handed out 2,000 leaflets as they went…

“A Gay Pride Week is when gay men and women show that they are not ashamed or embarrassed by their sexual orientation. It is a chance to come out of the closet, for gayness will never be accepted until everyone does this. Come out of the closet with us. Love and kisses, Sussex Gay Liberation Front.”

The leaflet also listed all the events for that week:

Tuesday, July 3
Rose Robertson of Parents Enquiry speaks at the Stanford Arms, Preston Circus, Brighton at 8.30pm on the problems of homosexuality and the family.

Friday, July 6
Disco at the Stanford Arms 8.15–11pm with a raffle and prizes for the most outrageous and the most conservative dress. Afterwards there will be a Gay Wedding between John and Graham on the second beach to the west of the Palace Pier at 12pm. Bring a bottle for celebrations.

Saturday, July 7
Gay Pride March starting from Norfolk Square, Western Road at 2.30pm. We shall march down to the seafront and along to the fish market opposite the Ship Hotel, distributing leaflets as we go. The more people who march the greater impact we will make. Those with any gay pride in themselves will be there.

Sunday, July 8
A Gay Picnic will take place on the beach to the west of the Palace Pier from 1pm.

As Mark Rowlands recalls: “We had been actively preparing to form a [Sussex] university group of the Campaign for Homosexual Equality (CHE) but had encountered considerable nervousness and bureaucracy from national CHE. What impressed us [about GLF] was the informality of the group and its lack of rules. There was no membership; people simply turned up. Meetings did not have fixed agendas. Anyone who wanted to speak was encouraged to do so. The politics were unashamedly radical; as others afterwards would put it, ‘we’re out and we’re proud’.

“Brighton GLF was officially formed in January 1971. Later we changed the name to Sussex GLF to reflect its wider geographical membership”.

SGLF member Doug Coupe remembers “It was a very fluid kind of organisation. People came in and we saw them for a few months and then they disappeared. This whole organisation was thrown together. We often didn’t know people’s full names. Some people stayed for years but some just drifted away.”

This fluidity has of course hampered me trying to identify people in the photos, but some have been successfully identified by other SGLF members.

In the photograph with the women on deckchairs, Peter Duxbury can be seen on the left handing out flyers. He remembers the chap in the dress with a hat, David Maplethorpe, who was into genderfuck – subverting traditional notions of gender identity and gender roles. “He was a character with his dress and everything. He used to go to work in his dress as well, at the Electricity Board, ‘cause I worked at the Electricity Board as well.”

Graham Wilkinson (who set up the Sussex AIDS Centre) and his boyfriend John Roman Baker (who set up the AIDS Positive Underground Theatre), can be seen together in one photo in front of the Embassy Restaurant. They were also the John and Graham mentioned in the leaflet who got married on the beach the night before.

The SGLF spokesman Graham Phillips can be seen in the floor-length skirt with the Civil Liberties banner.

Carrying the No More Sex Roles banner is Alastair Kerr who had not long come out himself. He was doing his teacher training in Brighton. The following year he moved up to London and became a key figure in the Railton Road Brixton Faeries.

Some members of the SGLF are not in these photos, for example Doug Coupe: “There was a lot of fear you know, when Gay Lib was coming to be known, there were an awful lot of people who were scared to death to be involved. I was a teacher, so I was a bit careful about where I was seen. I didn’t really want to be appearing in newspapers. As it happened when I was outed, it was a very difficult time, for years. In the end I had a breakdown. I went to work at Boots.”

Sadly, I haven’t been able to identify the flamboyant character in the robes with the GLF banner at the front of several of the photos. Peter has come close though: “I do remember a character like this, and he had long flowing things. When we went to have a pee, the hem of his garments were trailing in the urinals. So he was very glamorous but he was covered in urine.” But, as they say, I think that’s another story.

If you recognise him, or indeed anyone else in these photos please get in touch, I’d love to hear from you.

How did it go?

It was reported in Gay News and the Brighton & Hove Gazette as a ‘Gay Demo Flop’. SGLF spokesman Graham Phillips said “many homosexuals in ‘responsible jobs’ steered clear of the demo march for fear of being publicly identified and perhaps sacked as a result”. Nevertheless he “felt the march was one more step towards getting homosexuality accepted”.

While the actual demonstration may have only involved about 20 people, we know that the dance at the Royal Albion Hotel was “highly successful”, attracting 200 people. To quote Gay News again, “A spokesman for Sussex Gay Lib tells us that they are the only provincial GLF group to hold regular dances of this size and feel that with a larger venue they could attract 300 to 400 people. The music is provided by the gay group’s own disco and it particularly attracts the local gay girls who travel from such exotic places as Eastbourne, and the boys from faraway Portsmouth, where hardly any gay life exists.”

As John R remembers, the SGLF were “actively campaigning to promote Gay Pride and encouraging people to come out.” It may be hard for us to imagine now, but this was very radical for the times. The literal criminality of being queer was still very fresh in the collective memory.

“Much attention was paid to changing the attitude of the commercial gay scene. Each weekend we sold the newspaper Gay News outside the Heart and Hand Pub in Ship Street, and sometimes outside other venues. All the gay venues were closeted and refused to sell the newspaper, as did almost all newsagents.”

More conservative members of the local gay community were not impressed by the antics of the SGLF. Peter Duxbury remembers another SGLF march where “we walked all the way through Brighton in dresses, placards, into Hove, on to George Street, Blatchington Road. And this [gay] man in a raincoat and hat dashed up to me and he said something like ‘You’ll never get people to understand you dressed like that. Why are you doing this?’”

Where have these photos been?

“While searching through the negatives of the Argus Photographic Archive I found a small brown packet with the details ‘Gay Lib March 8/7/73’ written in blue biro. Viewing the images was like holding hands across time with those who were activists before us and reopening long unspoken stories, seen again in modern light.

“The importance of finding these images cannot be understated as it resets the timeline for overt local activism by 15 years prior to the Anti-Section 28 Campaign.” Tina from Gay Brighton Past.

Having checked The Argus and Brighton & Hove Gazette newspapers for that weekend in 1973, and the week after, it seems the photographs were never used. This would explain why no one knew of their existence up until now. It also means that pretty much no one has ever seen them.

We wanted everyone to have the chance to see these pictures, and Wayne from the Sussex Beacon has very kindly let us display them in the windows of the St James’ Street shop. They’ll be up throughout August marking the month that Pride now happens in Brighton.

These photos are a key piece of our history that up until now has been missing. We knew Brighton Pride began in 1973 but now we can actually see some of the brave individuals who started the fight for LGBTQ+ rights in our very own city.

The usual parade and park events may not be taking place this year, but we can still be proud of who we are and where we have come from.