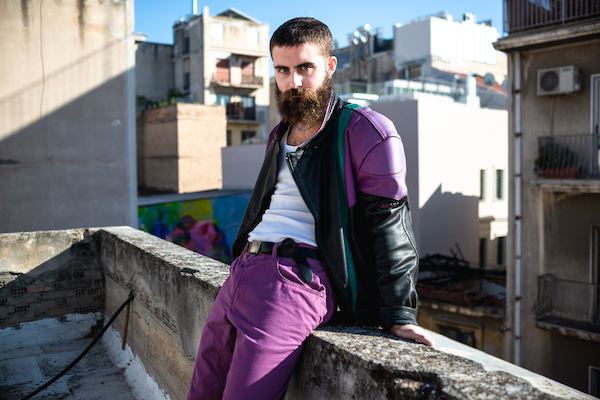 Elska Magazine, a publication dedicated to sharing the bodies and voices of LGBTQ+ communities around the world, has put the spotlight on Athens, Greece for its latest issue.

Inside readers can get up close and personal with a cross section of ordinary men from the gay community of the Greek capital. “Athens turned out to be one of the more difficult locations to find participants for our project,” says Elska editor and chief photographer Liam Campbell.

“Or to be more precise, the people we spoke to tended to have a lot of worries about how much they should reveal and who might find out about their participation.

“Athens is an ancient city full of iconic sites, history, and tradition, but this comes accompanied by a certain about of traditionalism that makes it not so easy to be gay and open here.

“Those who think of Greece as a hedonistic queer paradise are probably confusing it with holidays on islands like Mykonos and the antics of tourists. But for a local living in the Greek capital, things can be rather more conservative.

“But something quite magical happened once these men stepped in front of our camera,” continues Liam. “It seemed that they were able to tap into some of that ‘island spirit’ and let go. Some of that anxiety remained, but alongside came a desire to challenge social norms and proudly share the most vulnerable, queer and beautiful aspects of themselves.”

Inside Elska Athens readers will meet eleven local Athenian men. Each was photographed in their own homes and in their neighbourhoods (and also amongst some of the ancient ruins that they were so proud to show off), dressed in their own style and often not dressed at all.

Each of the men also wrote a personal story, something true and honest from their lives to help readers get to know them at an even more intimate level.

Some of the men featured include:

• Vasilis K, who spins a tale from his adolescence but changes the setting to ancient Greece, discussing how sometimes even those who support us the most can’t always accept every aspect of our queer selves;

• Manos M, who recalls a closeted man he met at a beach, with whom he spent an incredible evening… and what happened when they ran into each other again many years later;

• Andreas G, who describes how it feels for an artist when they lose their most valuable tool — inspiration;

• Yuri K, who shares his own experience of the rather universal queer story of needing to leave one’s home town in order to flourish… and how the result is not always as satisfying as many such tales lead us to believe;

• Nickolas F, who reveals how he made a decision early in his youth to stop caring what others think and to just live his truth to the fullest.

Elska Athens is 196 pages and is available from a select group of shops around the world as well as for order online from the Elska website.

Also available is a companion zine called Elska Ekstra Athens, containing two more Athenian men for whom there weren’t enough pages in the main mag, plus behind the scenes tales and bonus outtakes.