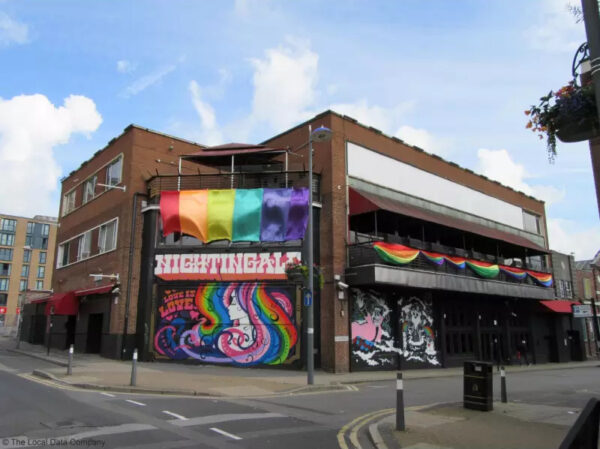 The Nightingale Club in Birmingham’s gay village could lose its balconies – which overlook Kent Street – in noise mitigation negotiations with planners. A new development which will house over 450 flats – if the application is approved by Birmingham City Council – will be located in the block to the West of the Nightingale.

Over £1.3million has been allocated to put in place measures to mitigate noise from the Nightingale club as well as The Fox, which is directly opposite the proposed site. Some of these measures would include the closure of the balconies on the first and second floors, replacing ground floor doors, and updates to the club’s windows, walls and roof. There is also talks of redesigning the smoking area on the ground floor as ‘acoustically treated’ and adding a new area on the rear of the second floor. In the apartments themselves, sealing some of the windows is another proposed mitigation. These measures are expected to cost roughly £600,000, while the remainder of the money set aside will be used to ensure affordable housing.

Lawrence Barton, owner of the Nightingale Club and Festival Director of Birmingham Pride, said that an agreement between the venue and the developers has yet to be reached.

Barton explained: “The council has been very supportive of our plight, but the discussion has gone backwards and forwards. If we reach an agreement in the future, which I certainly hope so, we will not be able to have the outdoor balconies. That will be one of the changes we [will have to] make.

“We are confident that the measures won’t harm the club. When developers come into an area with clubs, bars and a night-time economy, they have to work with operators so that any mitigation is there to protect both parties.”

He added: “The relationship between residential and night-time economies can work. If you take any major city centre or gay districts like Soho in London or Manchester, then inevitably over time, residential developments are going to be more commonplace. What each developer has to be mindful of is that they have to respect the community and the night-time economy that is already there.

“They are going to have people coming out at unsociable hours and people making noise. It’s a complex puzzle of trying to navigate our way forward and embracing developments, while also not ruining the LGBTQ+ community. I think there is space for both of them.”

This news comes after plans for another large apartment complex on Hurst Street in the gay village were approved by the council.