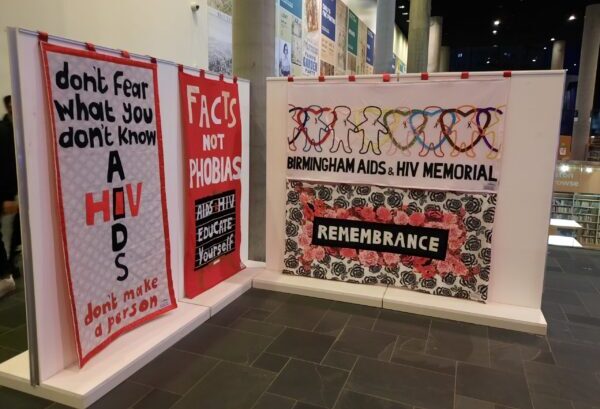 Birmingham’s Cover Up Quilts are an Arts Council-funded community project conceived by local artist Garry Jones, who also founded the Ribbons Birmingham HIV and AIDS Memorial. Inspired by the original NAMES memorial quilt which began in San Francisco in 1985, this project saw the creation of over 50 quilt panels designed to educate, destigmatise, and commemorate those lost to AIDS.

The panels have now gone on display in Centenary Square, in an exhibition that was opened by artist Garry Jones, activist Jonathan Blake, Saving Lives’ Dr Steve Taylor, and Positive Peers’ Rachel Greaves. The quilt panels will remain on display across the Centenary Square venues – Symphony Hall, The Exchange, the Rep Theatre, and City Library – until the end of January, at which point, they will be moved to BCU’s Millennium Point. The exhibition is open daily; however, you will need to check the venues for their opening hours.

Each quilt panel has been conceived and designed by a variety of groups and artists; from individuals, to organisations, from charities to universities. The volunteer group Sew Marvellous acted as quality control, which allowed groups of non-sewers to be involved in the panel creations, before they then spent hours stitching the quilts to life.

These works of art explore a diverse range of aspects from the history of HIV and AIDS in Birmingham, the UK and internationally, including: access to PrEP, the Don’t Die of Ignorance campaign, and the groups of lesbians who helped care for HIV+ gay men, known as The Blood Sisters. Other quilt panels are more personal, commemorating loved ones.

More information about each of the panels, their designers, artists and sewers, as well as more information about the project itself can be found in the exhibition’s guide book, which is available to purchase for £10 from Birmingham City Library. Proceeds will help support the ongoing work of Birmingham AIDS and HIV Memorial and Cover Up Quilt Project.