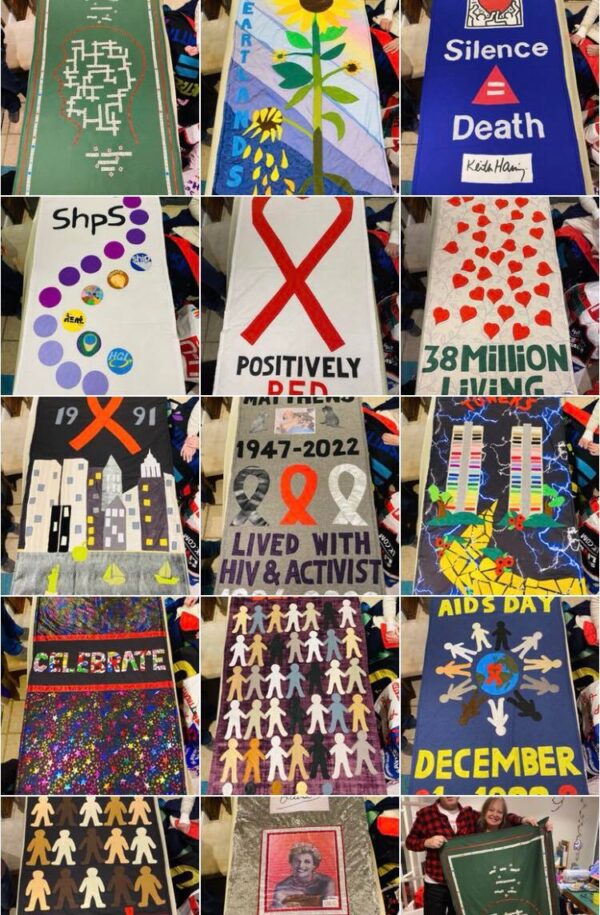 The Cover-Up Quilt Project is an Arts Council-funded community art project, led by Garry Jones, which features 40 quilt panels each of which signify a historic moment or memory – locally, nationally or internationally – in the 40 years since the first HIV diagnosis in the UK. These 40 quilt panels will now go on display in Birmingham city centre from Tuesday, January 10.

The quilt panels – which were used in the World AIDS Day procession ahead of the grand reveal of the city’s new AIDS and HIV memorial The Ribbons – will be displayed in a Centenary Square tour exhibition which will see them exhibited in the Library of Birmingham, the Rep Theatre, the Exchange Building, and Symphony Hall; all of which are located on Centenary Square. Visitors will be able to view them in these venues until Tuesday, January 31.

Each of the 40 quilt panels celebrates, remembers or educates people about a significant moment in the history of HIV and AIDS from It’s A Sin – the celebrated Russell T Davies show which inspired Garry Jones to campaign for a memorial in Birmingham – to the undetectable = untransmittable campaign, which serves as a reminder that HIV positive people on effective antiretrovirals with undetectable levels of the virus in their body cannot pass the virus on to others.

One of the quilts is a homage to Dorothy Towers, a block of flats in the city – officially called the Sentinels – which gained a reputation for being a place where many LGBTQ+ people lived, and during the height of the HIV epidemic in the mid-’90s, many living in these blocks had the virus; some sadly passed away.

Another of the panels is in memory of Tom Matthews, an AIDS campaigner who lived with HIV. He and his partner, Ian Scott, were together for nearly 35 years but initially believed that they would only have two years together. Tom sadly passed away aged 74 from a medical condition unrelated to his HIV+ status, decades after his diagnosis.

Ian told BBC Midlands Today: “He was the most wonderful person. He was just amazing, there was something really inspiring about him.”

A group called Sew Marvellous were involved making the quilts, ensuring each panel was ready for the reveal of the city’s memorial. Sue Sharpe, from the sewing group said it was “quite moving to hear some of the stories. You don’t hear about the 40-odd million or so who’ve died of HIV and if you do, it tends to get categorised with the gay community and it’s not just the gay community, it affects a lot of people.”

After it’s display in the Centenary Square venues, the Cover-Up Quilt will be displayed at Birmingham City University’s Millennium Point from February 1 until February 28.