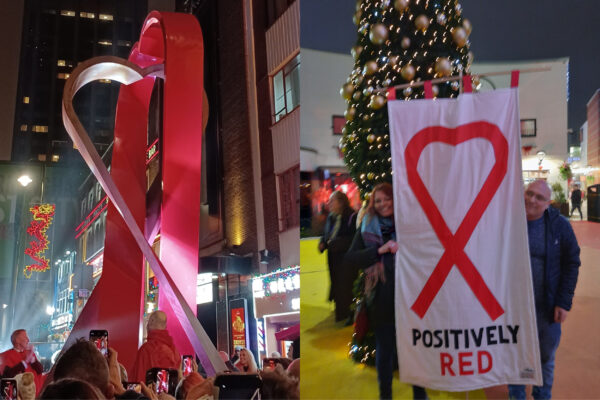 On World AIDS Day – Thursday, December 1 – the Birmingham community came together in Hippodrome Square to witness the unveiling of the city’s AIDS & HIV Memorial sculpture, almost two years after the idea was born from artist Garry Jones.

Jones, alongside the sculptor Luke Perry and the rest of the team for Birmingham AIDS & HIV Memorial, made the six-metre steel sculpture – the largest memorial of its kind in the UK – a reality after raising more than £180,000.

The unveiling ceremony was opened with a Chinese dragon dance performance, followed by three choirs. Then, there was a procession led by Birmingham drag artist Twiggy alongside Cheddar Gorgeous – many of whom will know from RuPaul’s Drag Race UK – which displayed the ‘cover-up project’.

Funded by the Arts Council, the cover-up project was inspired by the original AIDS quilt and it features 40 panels to represent a significant happening in the 40-year history of HIV and AIDS in Birmingham, nationally and internationally.

These panels, which were created with the support of the group Sew Marvellous, pay homage to a variety of historic moments including the advent of ARTs, as well as more personal messages such as one panel in memory of Tom Matthews, an AIDS campaigner who lived with HIV and who helped source funds for a range of projects in the West Midlands.

Following the precession, there was a line-up of speakers who delivered moving speeches to celebrate, remember and educate, including: Dr Steve Taylor from Saving Lives, Rachel Greaves from Positive Peers, Garry Jones, Luke Perry, Andrew Bentley-King, Phil Oldershaw and others who have been part of the team behind the memorial.

Then, the countdown began and the memorial, which features two interlocking red ribbons, was finally revealed. The plaque beneath the memorial delivers a powerful message to accompany the ribbons, reading:

“A symbol of remembrance for the forgotten with a vision of hope for the future. Remembering those lost to the ‘Neglected Pandemic’ and those who came after. Celebrating those who live with HIV today and in the future. Educating everyone to eliminate fear, shame, stigma and prejudice.”