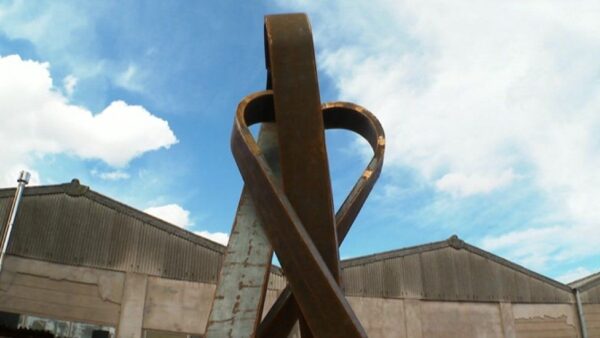 Over seven months, more than £180,000 has been raised for the Birmingham HIV and AID Memorial – a new public artwork in Birmingham, which has been designed to commemorate the lives lost and create conversations to tackle the ongoing stigma faced by those living with HIV. To donate, CLICK HERE

The five-tonne, six-metre tall sculpture – which depicts two interlocking heart ribbons, one of which will be painted red while the other will be left to rust naturally – was designed by artist Garry Jones who told the BBC: “We want this to be a beacon of hope for people to stop the fear, stop the stigma, stop the prejudice.”

The sculpture is being created by Black Country-born Luke Perry at a steel foundry in Cradley Heath. He told the BBC “This is probably one of the most intimidating things I’ve ever made. Even though it looks quite simple, the complexity of making those curves in metal is really difficult, sometimes dangerous. Just undertaking it, not knowing whether we’d be able to do it, was quite frightening, but ultimately very rewarding.”

Phil Oldershaw, who set up the campaign alongside Garry and the owner of the Fox, Andy King, said: “My best friend was HIV positive. We were told in the early 1990s that he wouldn’t see the year 2000 and he did. We celebrated right until 2019 when he passed from a different illness. I saw the stigma that he had to go through, so it’s important for me to support such a project.”

Rachel Greaves – who got to see the memorial for the first time recently – was diagnosed with HIV in 2015 and now runs Positive Peers, a support group in the city. She said of the sculpture: “It was mind blowing. I certainly felt a feeling of empowerment, that this is going to be in the city centre, and HIV and AIDS is going to become a talking point again.

“We’re not going to pretend that people aren’t living with it, that people haven’t died from it. We can encapsulate all of that in this beautiful, absolutely stunning structure.

“As a heterosexual woman, an old-fashioned opinion was that I was either a sex worker, or an intravenous drug user. I’m neither, I was unfortunate, but due to becoming HIV positive, I’ve met so many amazing people and become part of a great community.”

Businesses and venues in Birmingham’s LGBTQ+ village have helped raise money for this memorial, which is due to be unveiled in December in time for World AIDS Day on December 1. However, the campaign still needs to raise a further £30,000 for the sculpture, which is thought to be the largest of its kind in the UK.