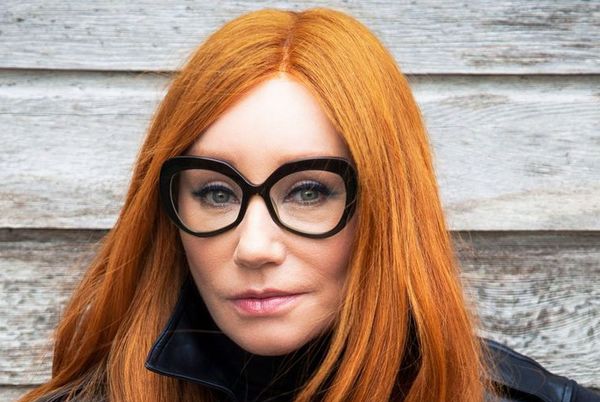 Ocean to Ocean is Tori Amos’ sixteenth album and it’s one of her best. Written during lockdown in Cornwall, Amos reflects on isolation, chaos in America, the death of her mother and lost loves. The subject matter may be heavy but the album sounds life affirming. Amos is not wallowing in negativity: she’s fighting her way out of it.

Needless to say, she’s one of the most talented singer-songwriters to emerge in the last three decades. We caught up with Tori to find out more.

This album seems very personal, even by your standards. “We might scare people away by saying that! A lot of the time I travel when I write. Usually there are a lot of influences to draw from, but I was in exile as an American in Cornwall. It’s a wonderful place to be. Still, I couldn’t travel. I had to work with what I had. Lockdown has made us all take stock and think about where we are in our lives, and find out how we put ourselves into a good frequency.”

Swim to New York State is one of the standout tracks on the album. Is it about escaping lockdown? “It can be about whatever you want it to be. I wrote it as a love story. It’s about a guy who left Cornwall and went to New York because his heart was broken. The female character I’m singing was busy with her life, having success, working on her career. Finally, she was able to value what he gave her when they were together. But then she faces the question: is it too late?”

You have a particularly strong connection with your LGBT+ fans. You once said your music is too raw for straight men. “Of course. It’s another kind of subtext that’s going on all the time. I think talking about emotions is welcomed in the LGBT+ community. People don’t start looking the other way and trying to turn the sports channel on. Usually, deep discussions don’t happen at the pub while the footy is on. All kinds of chat is happening but it’s not like ‘let’s really talk about the dark night of the soul.’ Whereas I find people in the LGBT+ community are happy to share their experiences; what they’ve learnt, and what’s shaped them.”

You play a new cover version every night on some of your tours. How long does it take you to pick and rehearse those songs? “Sometimes I’ve worked them up on the side and already spent some time with them. But sometimes someone gives me an idea and I work it up at sound check – we then do it live that night for the first time. We do it every day – no one can miss a soundcheck. I think it’s so important. A lot of stuff gets worked in soundcheck.”

You’ve released deluxe versions of your early albums. Will there be a deluxe version of From The Choir Girl Hotel? “Complex answer. It’s more a technical conundrum. It might happen but it won’t happen in the next year.”

Is there a central message on the album you’d like people to pick up on? “I believe the songs are going to take you where you need to go. I don’t want to tell you how to interpret them. I gave you the backstory of Swim to New York State but it might take you to a different place.”

“These songs operate as a sonic potion. I got my cauldron out, you see. I’ve got to get out all of the negative energy about the madness in America – from Trump to the storming of The Capitol. The muck is not where I want to be: I had to write myself out of it. I put the most amazing elixir in the cauldron. You can stand in the songs yourself and go wherever you need to go.”

Which new song are you most excited to play live? “I want to play them all!”

You recorded a Christmas album called Midwinter Graces, not to mention seasonal songs like Winter. Do you enjoy Christmas? “I love Christmas. I like the spirit of it. I like walking around and seeing people smile. It’s heartwarming seeing people smile. I think we could all use a bit of that right now. It’s been intense. There’s been a heaviness. So that’s what I’m looking forward to – seeing the sparkle in people’s eyes.”

You’ve been very prolific since Little Earthquakes came out in 1992. “It comes in cycles, sort of like the seasons do. There are times when I’m researching and taking in; output is low but the input is high. I’m observing and making notes. That’s how you learn about things. Reading a lot and travelling are very important too. Those experiences become part of your ingredients.” They all find their way into Tori’s cauldron.

Your writing is confessional but very poetic. You also draw a lot from mythology. “I guess I grew into that. I realised that mythology was so important as a source. Hugely important; and it’s archetypal. You’re tapping into something that can resonate with people. We all have archetypes – someone might be more of an Athena person than an Aphrodite person. You see that in the choices they make. Sometimes you see a mix of archetypes in a person. You see a splash of Athena and Aphrodite; or different mythic archetypes. I worked with the Greek pantheon on American Doll Posse.”

Do you need a central theme or concept to make an album? “I don’t need a concept but sometimes I need a frame. That way you understand what stories you are telling. What drives these stories, what underscores it? Each album usually has a different goal.”

Ocean to Ocean is out now

Tori will be touring Europe in 2022