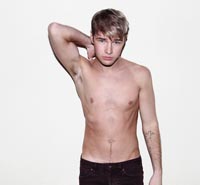 You may have seen Lloyd Daniels from the X-Factor singing at a gay club near you, but you’re likely to see a lot more of the Welsh wonder if you head down to the Marlborough Theatre next month as he’s appearing in internet dating comedy Up4aMeet….and he’s getting nekked!

“Actually, getting naked isn’t usually my thing,” says Lloyd, “but I do enjoy taking my clothes off after a few drinks. This will be my first time naked on stage. I play Scott who’s a bit of a dreamboat who gets his kit off whenever he gets the chance. What would Louis think?” Answers on a postcard please….

And is internet dating ‘his thing’? “No, not really. I like to catch someone’s eye and for them to catch mine and to see where it goes from there.” Be still my beating heart!

So what’s little Lloyd been up to since coming 5th in series six of X-Factor (his was the one with Olly Murs, Jedward, winner Joe McElddery and Danyl Johnson, who Lloyd was rumoured to have had a thing with)?

“I did the arena tour which was wonderful, and signed a record contract but they made me record songs that I didn’t overly like, telling me it would get me places. I split with them and have since recorded some stuff that I’m really pleased with. I’ve also done over 300 gigs. Oh, and I also played Prince Charming in a panto last Christmas, which was my first acting job.”

So he’s looking forward to acting in Up4aMeet? “Oh yes! I couldn’t stop laughing when I read the script. And Scott is very like me and so it’s the perfect role.”

Has he been to Brighton before? “Only to do the tour and gigs at clubs. The place seems beautiful but I’ve yet to find out what it’s all about. I’m sure you guys will help me out with that when we come down, right?” Form an orderly queue now please…..

COMPETITION: WIN A MEET-AND-GREET WITH LLOYD

How would you like to win a money-can’t-buy Up4aMeet meet-up with the cast on the night of your choice during the play’s Brighton run? Yes? Well, answer this ridic easy question:

Who was the eventual winner in the year that Lloyd entered X-Factor (have a glance above if you’re stuck)?

Then send your answer, along with your name and contact number to georgiecurl@gmail.com and keep your fingers crossed. One winner will win two tickets.