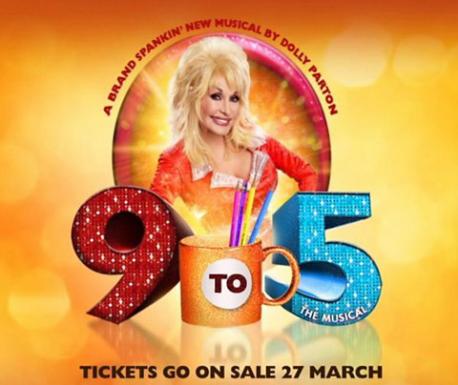 With music and lyrics by Dolly Parton you know, just know, you’re in for a night of warm hearted, feel good fun. This musical delivers gloriously.  Based on the film 9-5 (from the book by Patricia Resnick) the show follows the same plot and themes of three downtrodden and disrespected  women finding comfort and ultimately triumph by joining forces and challenging the male dominated hegemony of their office.

Dolly appears herself, projected onto a huge clock, fine tuned to each town, ‘Howdy Brighton’ looming over the action like a cross between the Ghost of Xmas past and Lawrence Olivier in Time, opening and closing each segment and leading us in a rousing hand clapping high kicking ending.  She was more than a bit disconcerting, but as Parton Inc always likes to keep a tight rhinestone encrusted fist on anything associated with her name, we can forgive her. (I just wished she looked a bit more like Dolly….)

The musical is set in 1979 and the hair and outfits reflect that perfectly, as do the gender politics and the music. The songs are good for a musical doing what they should and it’s always fun to have three main female protagonists to play about with, they each get a song full of hope, join forces for a fun dream sequence of revenge on their nemesis and then get  a triple series of delightful resolution songs at the end, I enjoyed it, and it’s been a long time since I left a new musical and heard the audience humming and singing the songs as they wander along the streets outside the theatre, always, always a good sign of a fun evening out.

Bonnie Langford is perfectly cast as desperately sexy and deeply insecure  and there’s no doubt her raunchy gymnastics were impressive although I fail to understand the need for stockings and cervix skimming shorts in a musical with feminist leaning, however…..  Jackie Clune, Amy Lennox and Natalie Casey are all superb, allowing the downtrodden and unhappy characters to sigh, break and then blossom with verve and engaging realism. Individually there were superb, together they are a triumph. Singing and dancing their heels off they combine to shift this musical into a really vigorous space.  I thought Clune gave the better performance, but then she’s older and fits the character better for me, but that’s just a preference, Lennox was delightful and Casey brought the house down, so they all deserve thanks for giving us such a great night out.

The second half of the show really gets the tempo and narrative swing going with some tender scenes and lots of laughter from the comeuppance of mean sexist Franklin J Hart, superbly played by Ben Richards being strung up by the Trio. He was great fun, his deep resonant voice the perfect foil to the tight harmonic delights of the three female leads.

Good fun, my Dolly expert companion was impressed and enjoyed the evening too, finding the right balance of home spun wisdom and uplifting melody in the simple but effective tunes. Its appeal to women is obvious and it has more than a knowing wink to its gay audience  with a few bare-chested handsome dancing hunks too.  It’s got high production values and although it’s a minimalist ‘wheel on, twirl it about’ set, it works and works well, there’s a lot of energy on stage and that translates into an excited, satisfied audience.

So if you want a fun, distracting and delightful feel good musical with no too many hidden depths to worry you, then book a few tickets out to this, it’s rare these days to come across a musical show that’s a delight to recommend, but then that’s Dolly for you. Canny as she is brassy never leaving a rhinestone unturned.

For more info or to book tickets see their website here: