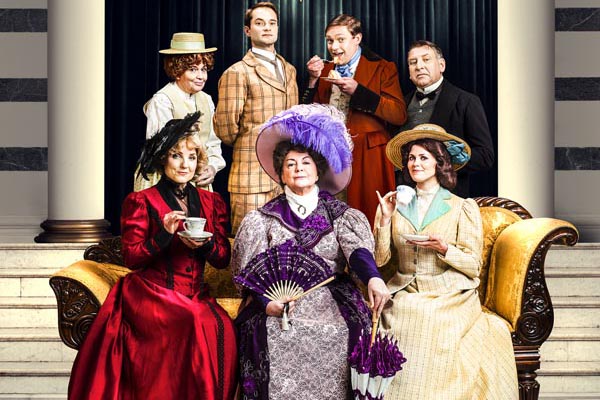 IT’S always difficult to walk the walk of Lady Bracknell, and an audience will always tremble as the actress clears her throat to utter her immortal lines, but much in the way of the cucumbers for her sandwiches there was something missing here tonight in this Original Theatre Production of the Importance of Being Earnest.

WE had the haughty matriarch from Gwen Taylor, in a most delightful costume, doing the lines and acting away but the musty, fusty, meanness of Lady B was absent.  She wasn’t so staunch and there was a hint of playful warmth which gave her some added dimensions later on in the play, but no ruthless slapdown, the gorgon was gone.

Thomas Howes as Algernon set the louche tone although he seemed slightly distracted, but his rich voice bounced around with a playfulness much-needed in this play. Everything is to be toyed with and then cast aside and he lounged, draped his large form over uncomfortable fiddly furniture and fed himself accordingly. Kerry Ellis’s Gwendoline has the necessary incendiary flare and fire but little to aim it towards and very little in the way of ricochet to worry about but owned the stage when striding across it.

A lot of the characters felt like missed opportunities and one can only suppose this was a deliberate choice of the director, looking for something new and modern, something clever to be teased out from the text, but this remodelling of the characters meant we lost something quite distinct. That quick sharp poke of absurdity which utterly deflates portentous poise.

Cecily was played like a stalker, not a drop of innocence in her, ignorance most certainly but with a knowing manipulation quite beyond her years or script, it made some of the scenes more brutal and harsh than they should have been.  Prism was a half full glass refracting just one note, Dr. Chasuble a charming bumbler, and on it went.

Drawing room plays are always hard work; there was a lot of parking and barking but the acting felt half-hearted, with characters squaring off against each other in panto mode, either under a rain of tea cakes thrown without care or accuracy to insults wrung though with the pace of a nasty type writer.

Timing is all in Wilde, all. Everything else is just words and clever people and we all know what he thought about them.

The set, from Gabriella Slade looked good with glazed panels of burnished faded Charles Rennie Mackintosh glamour, switched and changed with ease. The costumes and lighting worked well to give the right feeling of change and atmosphere but the sharp edge of Wilden wit had been smoothed down to a soft wet slap, more slapstick than poke with sword stick.

If you’ve not seen Earnest before than this is a perfectly adequate production of it, with all the words in the proper order, and all the funniest lines given their due, but some of the joy of Wilde is the strange way his words shift and move with the times, giving prominence and laughter where it might not have been a season or month before. The whole thing needs bounce to throw it about and this production in the wonderfully evocative and seriously comfortable Devonshire Park Theatre felt ever so slightly pedestrian, each scene fizzling flatly away rather than landing with a massive explosive ‘whomp’ to curtain.

It was harmless and funny but without the real force and shock of the bite that Wilde’s words hold, it felt as if we were sitting on Oscars lap and being stroked very gently, rather than grabbed by our tails and hurled around the drawing-room before being jettisoned off into the orangey under some verbal inertial force.  The play might be more than 100 years old but it can still sting while it induces giggles.

Oscar Wilde should never be tame, even in the wilds of East Sussex and Eastbourne, that hotbed of Bunbryness and perfectly judged archness, the well-dressed matrons and non-matrons of Eastbourne deserve a sharper jab with the Wilden stick, although – and this is no reflection on them – they did seem happy laughing along with this comfortable production in the well upholstered seats of the Devonshire Park.