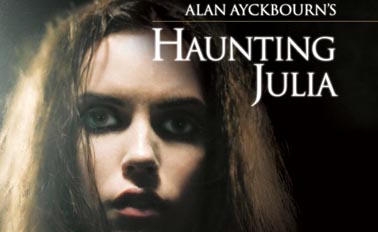 A ghost story on a cold dark winter’s night at the grand old Theatre Royal? What a delight and in the hands of Mr Ayckbourn an entertaining treat too.

Duncan Preston, Richard O’Callaghan and Joe McFadden star in the UK tour of Alan Ayckbourn’s study of grief, obsession and the supernatural and this well matched trio of very accomplished actors give a good job of blending these three different men into a joint descent into fear. .

This is not a typical play from Ayckbourn, as it’s without any real apparent direction in the plot, although some things happen, they just happen, no reason nor narrative, tempo builds up from them, just building tension and the realisation that everyone on stage has secrets, some from each other, some from themselves.

There’s a few spine shivering ‘jumpy’ moments although the first half drags a bit, the second half is much better. Plenty of laughs sprinkled throughout the play too, to temper the tension.  The end …….(I suspect this is the point of this play,) shows that live theatre can be as spooky and scary exciting as film.

The open set, split in two, half a shrine to Julie, serves to focus and allow the claustrophobic pressure to gradually swell. The effects when ‘Julia’ eventually manifests are gloriously over the top and called to mind Elvira from ‘Blithe Sprit’, just without the wit. Perhaps subtlety is a misunderstood term in the spirit world.  There were screams from the Dress Circle and the ponderous sound of rolling eyes from my direction, however…

For more info about the tour see the company website here: HAUNTING JULIA

The characters are odd, downright strange; a father, who twelve years on from his daughters unexplained suicide still mourns her to the point of buying the place where she died, preserving the room and opening it as a museum all the while obsessively searching for answers.  A boyfriend who’s without reason but seems to hold the key to the death and a delightfully campy psychic on loan from Rent-a-Ghost whose fluttery hands needed to be strapped to his sides but whose constant questioning and prodding drives the tension forever higher. It struck me as odd that Julia’s death has gone un-investigated for so long if she was half as famous as she’s supposed to be. Even tragic Ms Winehouses rather obvious death got an Auto de Fe.

Great Theatre? No. A fun night out? Well yes, I enjoyed it for what it was, like a ghost train it was predictable and silly but it still made the audience jump, giggle, shiver and think. Ayckbourn kicks around the idea of creative genius being an un-shareable burden and picks apart some family dynamics but these are the only hidden shallows of the piece.

A predictable twist at the end makes the whole thing fun, and if you like a psychological creepy night out at the theatre, with no gore but a few frights then pop along to the Theatre Royal to catch this charming and well acted production.

For more info or to book tickets see the website here: