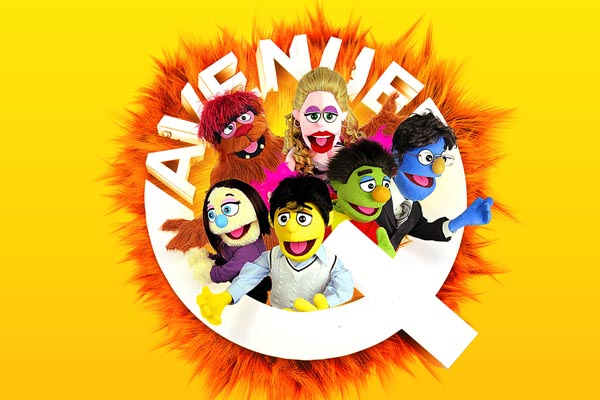 “It’s a Fine, Fine Line between Reality and Pretend.”

THIRTEEN years ago in the West End, and due to the hype, an actor friend and I felt obliged to see the ‘flavour of month’ the award – winning musical Avenue Q.

We were knocked out by this outrageously irreverent but hilarious show and, tonight at the Theatre Royal, the production was as strong as ever totally engaging us with the Jim Henson style puppets that gradually (with the expert puppetry skills and talents of this energetic and youthful cast) draw you in until the puppets seem to take on a life of their own.

The story is simple enough. Naive graduate Princeton comes to New York, penniless but with big dreams and arrives in Avenue Q where his dysfunctional new neighbours help him find his purpose in life.

Catchy tunes which are often offensive and disturbing are hilarious when delivered out of the mouths of fluffy puppets!

Included also, are sincere and moving songs especially when delivered by stand out cast member Cecily Redman. The whole cast are 5 Star performers as is the whole production.

Clear, slick direction from Cressida Carre, simple but bold lighting from Charlie Morgan Jones and the best sound I’ve heard in a while at the Theatre Royal, from Christopher Bogg.

Grab your tickets soon. A 5 Star must see classic.