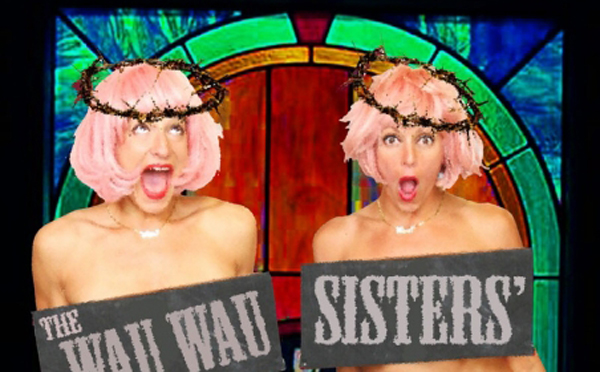 NYC’s bravest and bawdiest burlesque duo- The Wau Wau Sisters – returned to Brighton Fringe with their all new show of unearthly delights and debauchery.  Straddling, bumping and grinding the gap between religious & related, performance art & party, busking & burlesque, profanity & divinity, they contorted and writhed to a bacchanalian finale. Their deliciously profane reinvention of The Last Supper, served up with saviours, savants and showgirls, is at the Speigletent now, go buy tickets before you read any further.

This was a delightful and charming show full of fuax crudity, clever post feminist deconstructive humour, filthy foul mouthed asides and some pretty impressive acrobatics and trapeze work too, it’s not often this critic ends up on stage dressed as a Satyr, balanced on a semi naked lady’s feet, deep throating a banana while holy wine is poured on his body and he’s kissing a strange man, but you know, all in the line of duty. It felt like i was tripping while watching Benny Hill.

These two sisters are pretty bawdy in the widest and best meaning of the word, their feisty and funny act is intentionally shambolic but also sneakily slick with some very funny asides as they clash, whirl and interact to bring us their new show, a psychedelic reinterpretation of the Last Supper.  They have the energy and mania that reminds me of Stephnie Weir from the American super series MadTV and with a strong dash of utterly inspired lunacy that breathy, busty Madeline Khan brought to comedy too, they are two cool broads. It’s all slightly psychotically tremendous, but they are immensely loveable, and easy on the eye too and the energy in this show never flags for a moment.

The show builds dramatic tension well, even though the Sisters do their best to undermine their own slyly sophisticated humour with delightfully crude bickering and fooling around, and by the end of this short one hour show the audience were clapping along and cheering these two lithe and talented women as they took to the trapeze to astound us with a frantic and breathtaking duet on the traipses in their undies.

Their routine is a riot of flouncing, pouting saucy hotness but all smothered in some smooth as a piglets belly southern belle charm, they sing country and western while doing acrobatics and beseech Jesus to ‘come again, and again’. They had kindly adjusted their routine to the Brighton Audience too, which is always the mark of a good festival show, they have some fun audience participation, including the stuff I got caught up in, but it’s all in the best possible taste.

Part party, part burlesque, fully Rabelaisian and safely debauched they never quite loose control, although it seems they threaten to do so throughout the evening.  The frantic and wonderfully bizarre finale just goes to show how wild and chaotic theatre is best performed by seemingly dangerous performers who are supremely and professionally in control at all time.

Saucy and thrilling contemporary vaudeville at it’s best. A treat and the very best way for me to end the festival. Thanks Wau Wau Sisters you were simply the best.

For more info or to book tickets see the festival website here: