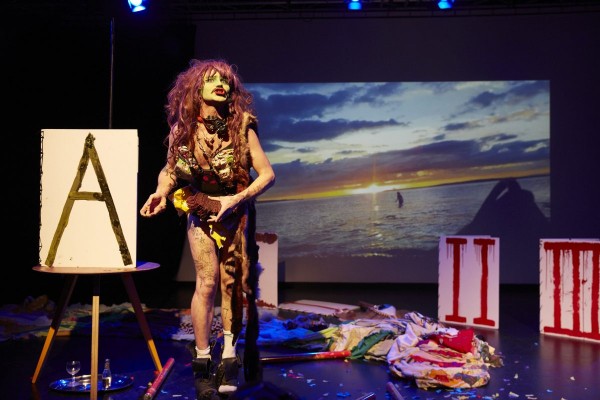 For the past two years, Brighton’s Marlborough Theatre have successfully produced, commissioned and toured New Queers On The Block, a programme created to develop performances by internationally renowned LGBTQ+ performing artists. NQOTB has travelled from Brighton to cities where such targeted and often experimental work is rarely seen, attracting a wide range of audiences from all backgrounds who often don’t have local venues catering to their tastes.

Glooptopia is a direct challenge to the notion that people with Autism “struggle with social imagination” and also to the simple fact it’s easier to imagine the end of the world than the end of capitalism. The world’s premier autistic green drag queen returns, following their debut Glooptopia show in 2019 to slay these twin dragons with one fell swoop, armed with their ‘Commucratic guillotine suitable for the 21st century’.

But what is Glooptopia? What is Commucracy? Oozing Gloop will go on an epic trip to find out.

Join them to travel to abandoned islands, halls of history and places of family legacy to find psychoactive solutions for psychopathetic citizens, trapped behind the screens that are there to help them communicate! We have a wealth of apocalyptic omens, disaster movies and critique; but zero 21st century post-capital-culture. Oozing Gloop defies this with revolutionary zeal, charm and determination to open radical new spheres of imagination and fantasy.

Glooptopia will endeavour to have relaxed showings for neuro-diverse audiences- more details to follow as well as BSL interpreted performances.

Oozing Gloop is from Norwich and makes work in a variety of mediums. They have performed across the UK and internationally in a variety of contexts including Brighton Fringe , winning the Marlborough Development Award for The Gloop Show, SPILL festival, Arnolfni, Institute of Contemporary Arts, Submerge Festival, Latitude,Hackney Showroom, Yo Sissy Festival (Berlin) and the Venice Biennale in 2017.

New Queers on the Block is a scheme supporting the development of LGBTQ+ artists & audiences across the UK developed by The Marlborough Theatre. Supported using public funding by Arts Council England, with support from Jerwood Arts, Esmée Fairban and Unlimited.