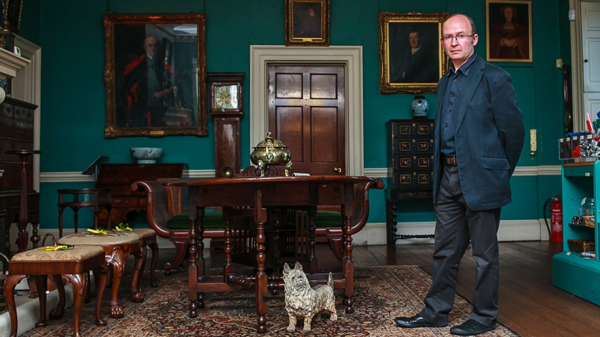 The Contents of a House: A performance by Peter Reder

This is a world premier from British performance artist Peter Reder and commissioned by the Brighton Festival. He has spent the last weeks mining the tales and the treasures of Preston Manor and now he wants to tell you about them, or does he?

Preston Manor is the epitome of Edwardian glamour, its history reaching back to the Domesday Book. Over the centuries it has become a repository of memory: a trove of objects, images and histories. What are they, and what do they mean? Reder’s attempt to draw us into and then expel us from the stories that supposedly fill this house are undermined and then sabotaged by his need to show us the facsimile of memory and created carefully curated interpretations of history that are presented at places like Preston Manor. He teases a story out and then rambles on, seemly on a tangent until his digressions meet back up again in the next story. He unpeels and dismisses some of our most treasured cultural memes and then leaves us hanging for meaning. This is the anti-guided tour and he effortlessly and with some fun makes us think about what it is we want from these cherished places and what it is that the curators and presenters of our histories want us to think too.

The Contents of a House attempts to catalogue everything on show in the house in the hope that something of the unseen, the unspoken – even the unspeakable – will emerge.  What does emerge is the feeling that Reder is toying with us and our precious idea of British History, and shows us the pretensions, delusions and scathingly self-absorbed realities of life in a typical British manor house. From the profits of a drug fuelled war to the records of the pets- but not the staff that lived in this house- Reder reminds us that the upstairs downstairs world is one built on ugly foundations, while simultaneously making us laugh at our joint ideas of what history actually is.

I found him charming and subtly amusing, the promenade around the house teasing details from the objects on display to build up an unflattering portrait of the people who they were owned by, or were they? There is a suggestion, slyly unspoken that all of this is just twaddle, made up, improvised perhaps and yet the production of artefact, photographs and videos seem to show he’s been up to something in the archives these last few months.

With call backs and internal references, soft dissection and themes of providence and pedigree woven into his narrative I expected something a little more challenging, however it was a sweet wander around the house and Reder is inoffensively provocative and softly charming throughout the performance.

Till the 26th May