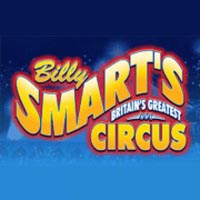 Billy Smart’s Circus is back on the road and touring the country. It opened in Brighton last night on Preston Park as part of the Brighton Fringe.

The first Billy Smart’s Circus opened in 1946 and stopped touring in 1971. Their Circus TV specials continued until 1983. Sadly, due to financial problems involved with financing a touring circus they did not tour again until 1998. In 2006 Billy Smarts Circus celebrated their 60th anniversary and in 2013 returned to touring the country once again.

When I was young the circus coming to town was a big deal. My father worked for the other big circus at the time Bertram Mills and all the family went to see every circus that arrived in Liverpool in the late 50s and early 60s. Those were the days when the Big Tops were huge, live animals were the big attracton and the trapeze artists performed without a safety net. It was all exciting stuff for a young child to take in.

Last nights show was a very interesting experience. The animals are gone and health and safety requirements dictate the risks that circuses can allow the performers to take are restricted. It did not matter.

You can ‘smell’ a good circus and last nights show ‘smelt’ very, very good. The popcorn, the candy floss, the smell of damp all contribute to creating the unique ‘smell’ only a circus in a big top generates. It is quite intoxicating! Most important, the live band is still there. Circus is not circus without live musicians.

For circus to be able to continue touring it had to be scaled down. The present Big Top is smaller and all the workers double in their roles. They take your tickets, they clean the ring and operate the lights. They most likely put up the Big Top also. It is fascinating to observe.

The star of this circus is undoubtedly Angelo. He is a Portugese, old school clown that engages not only the children in the audience but also the adults. His humour is subtle rather than knockabout which helps him engage all age groups. I loved him.

Essential to a modern circus are the flyers on the high trapeze. The Flying Aces are the first Australia Flying Troupe to ever perform in Europe. They perform on two levels. A pendulum type swing adds an extra dimension to the usual ‘rig’ of fly-bar and catch bar. The routine includes a forward somersault from the swing, flying 13 metres to the hands of the catchers. The audience were captivated with the performance.

The biggest oohs and aahs of the evening were reserved for The Gretzu Troupe, a group of springboard acrobats from Rumania. They were sensational!  The acrobats are propelled into the air from a specially constructed seesaw and land on the shoulders of the other acrobats. At one time they were four high.

Eddy Carello is a unique act combining juggling with playing the drums. His tricks were astounding and once again kept both old and young captivated.

Other acts included Alex the Fireman who performed a very entertaining knockabout routine on a rotating fireman’s ladders with his head on fire at times. Miss Caroline performed solo on the high trapeze swing; Desiree Chavez got into all sort of positions in her hand balancing act; Josie performed elegantly on the aerial silks and Mathieu the clown was the perfect foil for Angelo.

The show was just the right length and even though half the audience were children, the performers never lost their attention once.

The circus experience changed when animals were banned and economic pressures caused many establish family circuses to have to stop touring or close down.

What we have here is tradition circus at its very best. I had a great night out and my only complaint was the chips at the food stand were not cooked well enough.

Get out and relive your youth. You will be pleasantly surprised.

Finally it was nice to see the Rainbow Flag flying at the entrance to the Big Top.