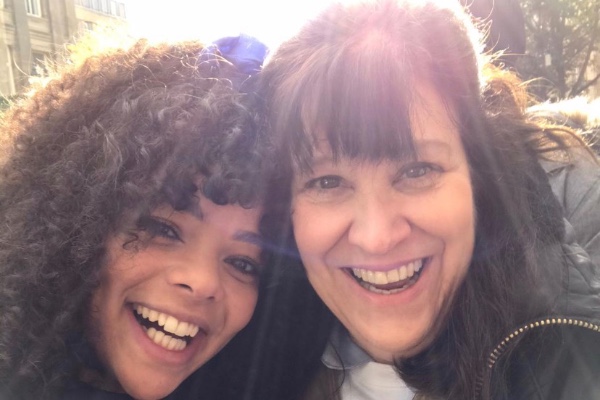 Jill Nalder has had a distinguished and wide-ranging stage career, but I guess nothing could have prepared her for the amazing AIDS-era tv series It’s A Sin , where she plays opposite a fellow actor  who is playing Jill’s younger self .

And creator Russell T Davies adds another spin – Jill plays tv Jill’s mother in the Channel 4 series . How was that I ask her – coming face to face with her younger self played by Lydia West ? “ It was very surreal – more so off the set in discussions rather than during the filming. Once you are actually acting you are so concerned with the job and making the scene work, you forget the real-life story. “

Her long connection with Russell started when they met at  West Glamorgan Youth Theatre as  teenagers. “ It was a county drama course. We loved it. We had such a laugh, a lot of crazy times and we – a small group of us – have been friends ever since. “

Central to the story of It’s A Sin is the Pink Palace where five young friends set up home initially unaware of the tsunami approaching. “ The Pink Palace was our nickname for our flat when we were in drama college. It was seriously pink! The furniture- sofa and chairs were dusky pink dralon. There were long pink velvet curtains, dark pinky/purple wallpaper and sort of dark pink carpets. It had many chandeliers and solid silver cutlery . It  really was a palace. We had the best flat ever,” she tells me.

The staggering central theme  of the series is the nature of the illness and its painful untreated spread , leading almost always to death. Jill says: ‘ The loss of my friends has left a big gap in my life. I feel so sad that they have missed so many years. Sadly someone who was part of the Pink Palace did die in the early 90’s . In It’s A Sin the characters are a mixture of the personalities of many of my friends and of Russell’s. “

” My feelings at the time were fear and confusion – fear of a mystery illness and much like now, confusion and misinformation or simply lack of information. The stigma and prejudice then  was very different though.”

Her parents were extremely supportive although they didn’t march  as in the tv episode depicting a demonstration. “ However, they did come down from Wales many many times to all our fundraising events’ “ Jill says.

“ I didn’t get arrested as Jill Baxter does. I’m not that brave. Russell has definitely added his own imagination to that part of the story.” What is true to life is the depiction of the young Jill visiting patients with AIDS – often their only visitor . “ My time visiting hospitals on a regular basis spanned the best part of a decade. In the early years I went as a volunteer just to help fight the stigma and then in a more intense way when people very close to me fell ill. I was always in a hospital ward, it seems’”

Jill has kept involved with AIDS-related fundraising with the charity  West End Cares, and over the years with some fundraising for the Sussex Beacon in Brighton with David Raven ( aka Maisie Trollette). “ Now our theatre charity  is called Theatre MAD – Make A Difference  – and we are right now planning our next fundraising event in the West End when we finally come out of lockdown.”

Jill’s theatre career has been heavily populated with musicals since she left college – Annie, Gypsy, Godspell, Oliver and of course Les Mis as well as extensive UK tours – a total of 8 years in the West End. “ That was joy.  Recently before It’s A Sin I was in a film called Finding Your Feet and I also work with my own theatre company , set up with fellow Les Mis performers Linda Jarvis and Jon Osbaldeston, together with lifelong friend and West End MD Jae Alexander. “ The company – WestEnders – performs staged musical concerts – everywhere from Brighton to the Amazon.

Was she surprised by the outpouring of feeling over It’s A Sin? “ I’m overwhelmed by the public reaction to the series . We all are. It is so so exciting. It seems we are trending all over social media – unbelievable ! “ she says .

As the weekly slot of the series comes to an end, it’s obvious that the young Jill is the glue that keeps these friends together and leads to amazing behind-the-scenes caring work for those who suffered the onslaught of not only a then-deadly illness but the public and media  ignorance and  phobia at the time.

And real-life Jill Nalder is still supplying that glue today – some 40 years on.  It’s even been given a social media tag – #BeMoreJill. Fabulous lady.