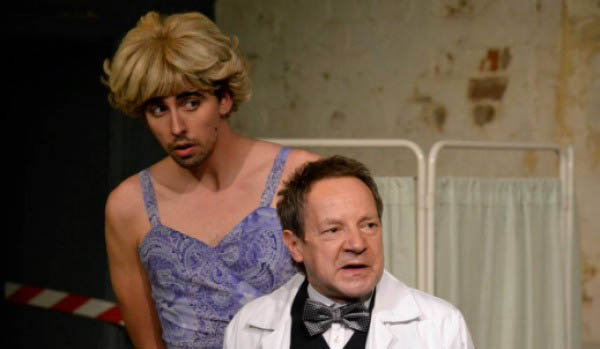 Dr Prentice (Brian Capron) is in the middle of seducing his secretary Geraldine (Melissa Clements) when he has a surprise inspection from Dr Rance (Michael Kirk) who holds a senior position in the government department which oversees madhouses. Prentice’s attempt to cover up his misdeed soon spirals out of control as his wife (Jenny Funnell), a policeman and a blackmailing hotel employee find themselves caught up in the ensuing chaos.

This is a splendid production which succeeds through the strengths of its performances. Capron exudes a louche charm as the innocently lecherous doctor who is powerless to stop the chain of events he’s unwitting set in motion. As his foil Kirk is magnificent giving a richly enjoyable study of a patently insane megalomania. Funnell shows us a woman who is pretty much inured to the iniquities of men whilst possessed of a genuine strength in dealing with them. Clements is sweetly naive as the innocent victim of Prentice’s attentions who never gives up hope even after being declared insane twice in one day.

The timing is occasionally a beat off, but as this is early in the run I’m sure this will be sorted out as the production beds down. With so much that is wonderful about the evening this is a minor criticism. I particularly loved the pained look on Capron’s face as he’s forced to explain that he’s conducting a medical examination of the policeman as he fears the constable might have been interfered with. By Prentice himself. And Kirk’s mixture of incredulity and glee on learning that Mrs Prentice is beset by visions of naked men is another highlight in an evening full of them.

Continues at the Emporium, London Road, Brighton, until May 9.