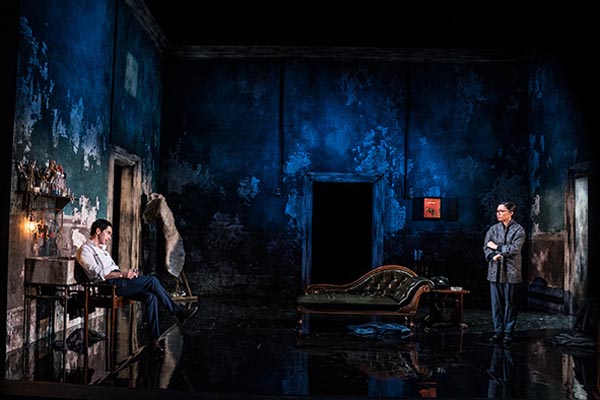 The Picture of Dorian Gray

“What does it profit a man if he gains the whole world and loses his soul?”

This bold new production based on the classic novel celebrates Wilde’s wonderful language and appeals to this mixed age audience. Featuring Wilde’s famous wit, The Picture of Dorian Gray is presented as a two act thriller with a narrative momentum which keeps the attention up until the final scenes of the play.

It’s a grand setting for a decadent play, worked up from the Oscar Wilde original this setting  by Titled Wig and Malvern Theatres is a well-crafted piece of theatre with their trade mark high production values. I’ve not seen a show of theirs I’ve not enjoyed and this evening’s production in the Devonshire Park Theatre was no exception. The theatre continues to improve, having just updated or rather retro modelled it’s lavatorrial facilities to high Victoriana – Mr Crapper ‘s finest porcelain no less, all brand new, but the kind of facilities one might expect in the house of one of the endless aunts referred to in Wilde’s plays.

With its efficient, clever walk on, walk off character intro’s depicting set changes, not only saving valuable time and fiddling but also making it clear that most of these characters live in the same interchangeable spaces, luxurious, indolent, at leisure, with some swift smart lighting the set is transformed into a cheap theatre, a dodgy desperate alley way or another stage, rather well done the lighting and tech crew. We were impressed.

The faded grader of the set, hinting at old things being constantly renewed, with some rather clever gas pipes being added to the Georgian walls was lovely, there were some excellent small touches; flowers faded and died which gave a subtle feeling of time moving on, even though the main protagonist is anchored in time, unchanged.

There’s a lot of set up in a Wilde novel, and the first act is mostly about the how and why, playing down the supernatural element is the only way to make this play work as the rest of it is so very much concerned with impact and indulgence.

The second act gets on with the meat and gravy of the play, Dorians descent into depravity, the way it leaves – his face – at least untouched and the hideous tragic destinies, impacts and immorality of the people around him. It’s a complex narrative filled with witty lines and awful sentiments, which is one of the reasons it is so delightful.

Overall this was a lovely piece of serious theatre, Wilde is always problematic to stage, what is left in, or taken out, how to ease the stifling class snobbery or sexism or even to lighten the blows of brittle slicing wit.

The company made some good judgement calls here, with good character development and engaging serious acting providing the heavy lifting around the narrative, allowing the audience to trust and connect with these rather obnoxious or pathetic people whilst allowing us to still find some understanding of the motivations and fear driving Dorian himself.

With some subtle soundscapes and tastefully modernised outfits we were presented with an insight not only into Wilde’s novel, but also into vanity and the ultimate responsibility to one’s own desires.

As we whizzed over Beachy Head with the full mood and a Baskerville fret spookily enfolding us and whispering us to our doom we pondered the themes and moods of this Dorian.

Good theatre should always leave you pondering. I’d have loved to have shoehorned in a metaphor about Instagram and selfie cultures, photo filters and the crafting of the perfect on-line persona, but this was such a seamless piece of good acting that it would seem vulgar to attempt such a thing. Conscience and cowardice really are just the same things after all.

Grab a programme, a lot of thought has gone into it and it’s – for once – a welcome accompaniment to this night of theatrical delight.

Plays at the Devonshire Park Theatre, Eastbourne until Saturday, March 23.