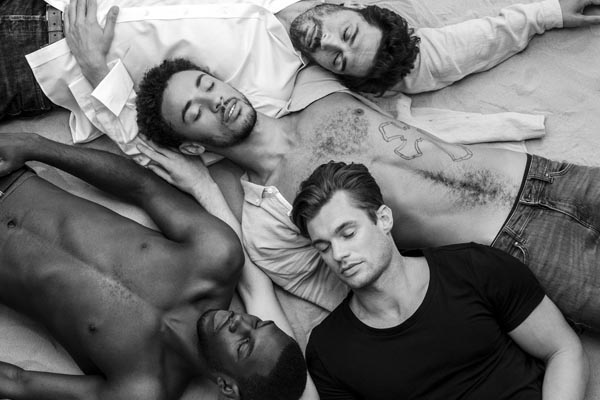 In London until May 19 there is a play that you should not miss. It is The Inheritance, written by Matthew Lopez and directed by Stephen Daldry.

WORD of mouth says this is the new Angels in America, but word of mouth is I believe wrong. The Inheritance is very much itself and I will try to explain why.

It is set in contemporary New York and deals with the inheritance of an old farmhouse in upstate New York. This house is significant in that it is an homage to both E.M. Forster and his novel Howard’s End. Is it necessary to be familiar with the novel before going? No. The playwright weaves the thematic elements of the novel so well into the play that anyone can pick up the gist of its plot, which I will not reveal as it would spoil the whole visceral effect of being there in the theatre watching it unfold.

The set is a large open platform. Gay men walk onto it slowly, barefoot, and take up their positions. Once they are all in position, the lights dim. They are mostly young, the inheritors of a new way of life that can either avoid or acknowledge the history of gay life that has led them there. E.M. Forster emerges from the wings and in his way helps them to tell their story, and to write it for themselves.

This is the only specific element I want or need to mention. During the 3 hours 20 minutes duration of the first play (it is presented in two parts lasting more than 7 hours in total), love, sex, AIDS remembrance, and a sense of our gay history are vividly portrayed. There are three acts with two intervals and each folds neatly into the next. At the magnificent climax the audience wept and was totally silent. As the lights dimmed, and then rose again to show the long line of (all male) actors, the audience stood and cheered. This was an event, and many were still crying with the joy and truth of what they had witnessed as they filed slowly out of the Young Vic and onto the street.

The acting is uniformly good.  Samuel H. Levine in a dual role deserves special mention for a performance that truly embodies being gay. Andrew Burnap and Kyle Soller, who are arguably the two leads in this first of two parts, also act well, but to me they seemed more on one note.

The direction by Stephen Daldry is simple, clean and fresh: no flourishes of overcooked theatre here, but a direct line of approach. Even the coup de théâtre at the end is simplicity itself and it is this, in both the direction and the writing, that makes the production so great. It is, in my opinion, the best gay play there has been so far, and many among those I talked with afterwards agreed.

Why? It pushes us into urgent questioning of what it means to be gay today, now, how to build our community once more, and also how to own our total history as gay men. The speeches are arias of beauty and truth: pure music instead of clichés and well-worn phrases. A Ravel quartet is played for a while halfway through. A line of young men listen. It is a beautiful pause between conflict, emotion and (not always) redeemed love and in its way it leads to the climax which has never been surpassed in gay theatre.

On leaving, I had strangest feeling: that the audience was glad to be alive, to be there, and to have seen it. I anticipate that Part Two could be an equal revelation. If you can, hurry and queue for any return tickets. Although a Broadway production looks certain, it is not yet known if the play will transfer in London, but we have had the privilege of seeing its world premiere.