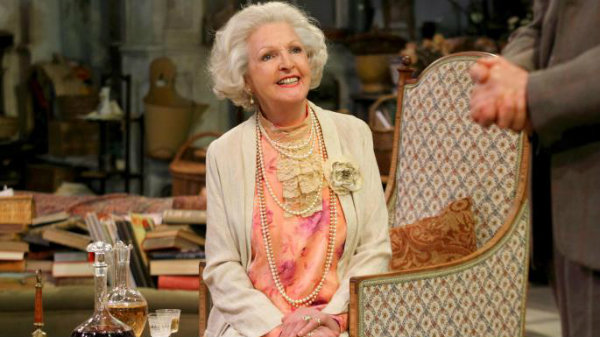 The set of a faded English house of some comfort is a delight, the lighting subtle and the quiet soundscapes of weather and bird song give us unchanging England outside whilst all is changing within.

Keith does throwaway humour in a devastating way and bring great warm laughter to a lot of places, the rest of the cast are given as much opportunity to make us laugh and they all excel. The snappy conversations, timed to perfection work well on us, and when the tension rises and outbursts start to strain the carefully taut membrane of polite social intercourse things become very interesting. It’s an exercise in British reserve, done with the right amount of simmer, the pot lids clatter, the stream rises, it’s all about to blow, but never, quite, does.

Written by Sussex-based playwright Enid Bagnold, and using the struggles with a chalk soil garden as the metaphors for struggle, growth and change threaded throughout the piece it’s easy to see why the local audience loved it, and it’s always a delight to watch Keith go full steam ahead into the particular kind of brittle withering matriarch that she does so touch perfectly. A peep over her glasses, an aside which fells oaks, a devastating pause – all get the laughter required. This play is no light drawing room comedy though, it’s heavy with meaning or the kind of thing that was meaning in the 50’s, of emotional training and forced family habits, of old habits dieing hard. The intrusion of a new person; here in the guise of Amanda Root’s Miss Madrigal is the catalyst for change.

Roots performance as the buttoned up Miss Madrigal is superb, nuanced and anguished, fiery and almost Pentecostal in her rage, she owned the stage, never resting on her laurels, which would never thrive in such thin chalky soil as Chichester could offer she digs for glory. The interactions between Root and Keith are the fulcrum this play turn on and all else falls into shade, the heaving undertow of loneliness and fear, of circumstance and hopes, of loss and losing are circled and rushed at but never ultimately directly addressed and it’s this very English type of avoidance that these very English actresses get to excavating to the chalky lime core. Chalk is a sedimentary rock laid down layer on layer with endless fossils embedded within and flinty nodules of impenetrable hardness, The Chalk garden is a play of layers with a flinty impenetrable heart, one that has to be gone round, not through and although ultimately unresolved and unsatisfying as a piece of dramatic theatre, it’s worth the effort just to see this superb cast with these two rather spectacular leading ladies giving us a glimpse of what can be done with poor soil when one puts in a hell of a lot of effort.

My companion, a great fan of Keith and with a chalky soil of her own came away most interested in Miss Madrigals list of plants that would thrive in a Chalk Garden.

For full details of the production or to book tickets see here: