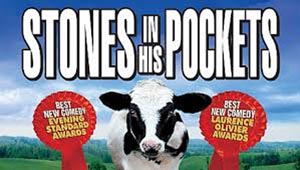 Imagine a play where the stars are walk-ons and the extras are the star performers. No, it’s not Rosencrantz and Guildenstern Are Dead where Hamlet has no lines; more like Waiting for Godot with no expectant menace.

MARIE Jones, its creator, captures the essence of the complex interplay of humans with the two male characters creating a myriad of people in this small rural Irish village, from a 17-year-old tormented drug addict to an old crippled squeeze box player, a spoilt Hollywood diva and her mindless hulk of a bodyguard.

The show – though just over 90 minutes long plus an interval – is delivered in Act 1 at breakneck speed- new characters being created in an intake of breath and revolve of the actor’s body.

Act 2 , after the suicide of the 17-year-old, is more thoughtful and less funny but nonetheless entertaining.

It’s an anti-Hollywood play; a group of vacuous Americans arrive in the village to film a historically inaccurate epic about the peasants’ uprising, using the locals as extras at £40 a day – a fortune in the poor inhabitants’ eyes.

Owen Sharpe as the high-energy idealist Jake is counterpoised with Kevin Trainor as the laid-back Charlie who seems to care for little, except the dreadful film script he has written and tried to foist on the movie-makers.

Some of their character creations work better than others but outstanding is Trainor’s version of the Hollywood star Caroline Giovanni and Sharpe gets great fun out of a bent-double old drunkard .

As the Hollywood director reveals when Charlie explains his script “You go to the cinema to be happy and to the theatre to be depressed”. It’s of course an over-simplification of what movies and drama are about, but we get the point.

There’s much humour in the little cameos of the team producing this Irish Poldark epic and we even get some Irish dancing where the two leads dance in the style of all the main characters.

It’s a tour de force by both actors, even if at times Lindsay Posner’s direction isn’t always sharp enough to delineate all the bewildering array of characters we meet- sometimes for just a few seconds at a time.

And the play has a twist in its tale, which you need to see to believe and laugh at.

Stones in his Pockets runs at the Theatre Royal, Brighton until August 3.