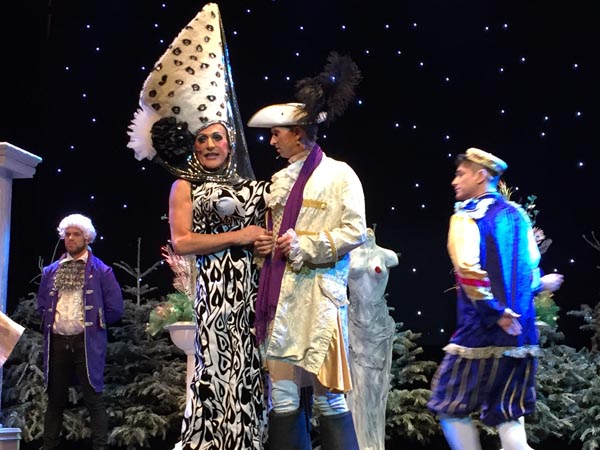 When you review shows as part of your job there is a responsibility to reflect accurately the quality of what you see.

On Wednesday I was in Croydon reviewing a new musical dealing with serious issues such as domestic violence, racism and homophobia, last night (February 4) I went to the opening of Sinderfella the Alternative Panto at the Sallis Benney Theatre, which I can honestly say was one of the funniest shows I have seen in years.

It had everything; first class staging, a brilliant script, fabulous costumes, great musical arrangements and ten top dollar performances from the leads who were performing at the top of their game, and a credit to the distinguished ‘Art of Panto’.

This is how Panto should be; reverence to tradition, a good coherent storyline, enthusiastic audience participation, outrageous costumes and when the adult tag is added, maybe just a few ‘fucks’ on the side.

Sinderfella is true to the original storyline except for a little twist when Dandini swops roles with the Prince of Mince, creating some magical moments. Not only were the roles swopped but also the personalities and for a while we end up with a butch Dandini and a camp Prince of Mince.

Jason Lee, a revelation as Dandini showed us a side of his talent we don’t usually see. The boy has serious comic acting ability! He was very funny indeed and as well being treated to his glorious vocals, Jason had the opportunity to really show off his comic acting talents when he became the Prince of Mince for a day.

Wezley Sebastian played The Prince to perfection, large and over the top my dear! With more front than Eastbourne his inclusion in the lineup brought a touch of West End class to the evening.

Stephen Richards aka Lola Lasagne and Dave Lynn played ugly sisters Vulva and Minge. These two entertainers, both seasoned mainstream Panto performers delivered a performance of pure gold. They looked fabulous with nine costume changes in all, were very, very, funny, supremely disciplined, and their presence on the bill brought not only credibility to the production but showed the audience, if they needed reminding, the art of traditional Panto is still alive, well and in demand in Brighton.

Christopher Howard’s Baron Hardon was spot on. When he chose a woman, the little better for drink from the audience for an audience participation number he struck lucky and the woman in question rose to the challenge, shaking her fanny like I have not seen a fanny shaken in many moons. It took the Baron’s breath away and he took some minutes to recover from the experience, as did I.

Allan Jay played a cute Buttocks. Allan is a great singer, a great dancer and has a fine bottom if you ask me to go with his cute Scottish accent.

Davina Sparkle aka David Pollikett, squeezed tightly into her fairy costume, made for a loveable Fairy Muff. Her jokes were very funny allowing Davina to shine and deliver a very accomplished performance.

As if by magic David Raven aka Maisie Trollette was beamed in by skype at different times during the evening reminding us what a great tradition of entertainers and performers we have in Brighton. Mike Mendozza brought vocal gravitas to his role as Lord Chamberlain while Chris Hibbert and Billy Jutton were not afraid to let us see their love handles while playing the villagers and dancers. It was all very reassuring for an old fatty like me.

Jason Sutton aka Miss Jason played Sinderfella and gave the show its funniest moments driving an electric mobility scooter, a replacement for the fairy carriage to the ball. Jason’s performance respected all the traditions of Panto, including use of language, while the faces he pulled alone were worth the price of the tickets. His performance was contained, but very funny and he made it all look so easy.

To be honest and fair this production has no stars, the show itself is the star!

A structured ensemble piece of the highest calibre bringing together all of the well-loved and experienced performer we have in the city as well as some of the best back room boys.

Quintin Young’s staging is of the highest quality and clearly he pulled out all stops to make sure the production looked spectacular and fabulous!

Joe Paxton the musical director provided the musical backdrop for the show. His choice of arrangements were very contemporary.

Special mention for The Ghostbusters number, which was brilliantly executed, will stand the test of time and would sit comfortable in any mainstream Panto production.

Andrew Stark’s script is current and very funny, while the Sallis Benney Theatre, not my favourite venue of choice, proved to be an ideal setting for the show.

Fairy Muff said it all at the end of the show. “This is a community show, bringing community together while raising a bit of money in the buckets for our local organisations”.

If you have not got your tickets yet, rush out and get some as if there is any justice, Sinderfella should become the hottest ticket in town over the next week.