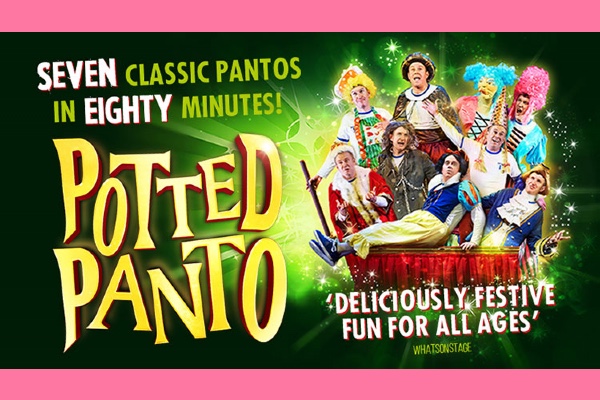 In my 71 years I’ve appeared in 2 pantos, seen two and written two and just when you think it’s safe to come out of lockdown along come 7  pantomimes – and all in one gloriously funny West End show.

Daniel Clarkson, Jefferson Turner and Richard Hurst have devised 70 minutes of golden entertainment suitable for kids and adults . And Dan and Jeff hold the stage on this tour of our favourites – from Aladdin to Sleeping Beauty and Dick Whittington – oh and A Christmas Carol sneaks in there too – much to Jeff’s annoyance.

And annoyance is a key part of Jeff’s Mr Sensible approach to the show while Dan is the smooth, zany stick  of dynamite always liable to blow the whole show to smithereens.

Jeff takes the lead in telling the panto’s storylines while Dan plays all the other roles , often having changes of costume offstage at breakneck speed.

Under Richard Hurst’s tight and pacy direction we  more or less get the gist of the panto plots with a lot of added funny bits – like an adult French Fairy God Chicken, with baguette instead of a wand; a Dick Whittington who as mayor of London is a tolerable lookalike for Boris Johnson and even a fleeting appearance of our own dear Queen.

The show races forward at a thousand quips an hour and for the adults there’s plenty of inunendo  on Prince Charming’s balls, ghosts and their ghoulies  or are they  goolies ?   and  with the French chicken a lot of oui or is that wee?

There’s lots of “ behind you “ and boos and hisses too  but for me the culmination where the two stars mash up Aladdin and A Christmas Carol giving us both Abanazar and Ebenezer is the brilliant summit of a mountainous climb of hilarity and good honest seasonal fun.

And for course Dan wins out by getting both Abanazar  and Ebenezer redeemed from their villainy in time for what they describe as a “ cheesy Christmas song “ singalong with the audience.

As the gung-ho Prince Charming who keeps cropping up  in each story tells us “Bring it on’ – I totally agree.

Potted Panto is at the Garrick Theatre, London ,  on various dates until 10 January

A note on Covid safety measures : Nimax excelled at keeping their audience safe, with outdoor temperature checks, electronic tickets and an opportunity for ordering drinks – which you can even order by phone in the spaced out theatre toilets ! Seats were lefty vacant between families and bubbles and one-way systems operate on the stairs . And face masks at all times –  Brilliant !