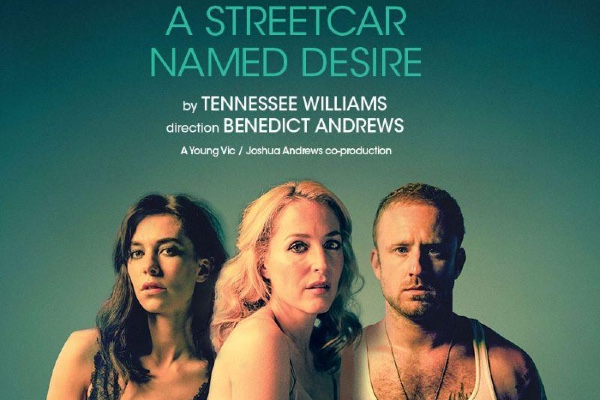 Tennessee Williams’  classic drama of love, despair, deceit and madness is strong lockdown medicine but the 3-hour version from the Young Vic is completely saved by a towering performance from Gillian Anderson.

Maybe it’s the sing-song Southern drawl or more likely the problematical staging, but there are periods where the dialogue becomes indistinct  in this TV-streamed presentation.

Never knowingly underwritten, Williams’ plays are angst-ridden maybe because of the slow tempo and lack of action, and this is no exception. But you can’t take anything away from the stellar turn which Anderson produces in Benedict Andrews tightly directed piece.

The studio-like space of the Young Vic is made even more claustrophobic by a top-heavy revolving set that sometimes obscures the camera angles and must have been frustrating to those in the audience.

Of course the lack of space is a key element of the play – humans living in close proximity in a pressure cooker of sexual repression and dark dark secrets, erupting occasionally into shouting and unexpected violence.

Ben Foster as the sarcastic, worldly wise Stanley, who has the measure of Anderson’s Blanche from the get-go , is powerful, muscular and down to earth, contrasting with the subtle poetry with which Williams sometimes imbues Blanche – she has love letters from her late husband which she says are “yellowing with antiquity”; or later when in drunken despair she craves “ a cleft in the rock of the world I could hide in “.

And of course saddest and most ironic of all, when she is being led away to an institution , the deranged Blanche looks at her attendants and says: “ I have always depended on the kindness of strangers”.

But at this  production’s heart is the complex, funny, distressingly tragic role of Blanche, whose lies about her past inevitably catch up with her. Anderson moves from haughty self-confidence and misplaced superiority, to utter dereliction across the 3 hours she is onstage and it’s a performance you won’t forget, however hard it is to watch.

Don’t forget to donate to either the National or the Young Vic to help bring live entertainment back to us. God knows we need it. Catch the play until Thursday 25 May, watch it here: