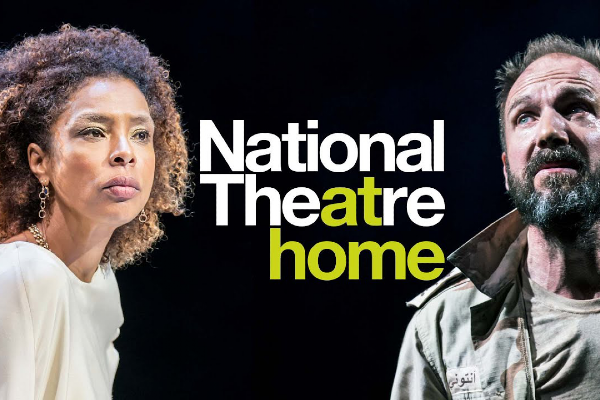 It has to be said that this National Theatre production of Shakespeare’s late play Antony and Cleopatra was well received when staged but it didn’t fire on all cylinders for me.

Having studied it for 2 years for A-level, I haven’t revisited the episodic narrative that often. And if you look back at previous notable productions, it’s the Cleopatras that the critics favour – Vanessa Redgrave, Dorothy Turin, Judi Dench or the ground-breaking Mark Rylance – and Antony’s tend to be forgotten.

Here too Sophie Okonedo is a towering queen of Egypt ; fickle, angry, passionate and subtle in her love and hatred.

Ralph Fiennes is clearly a man past his prime – initially swaggering, bumbling, often at the drink and scant  sign of his former nobility. He descends into a kind of hunched sel-loathing, knowing he should be better but utterly smitten by the love he can’t resist. He botches marriage, he botches battles and he finally botches  his own suicide – a scene which unfortunately the live audience decided was funny.

The filmic nature of the play – Act 4 alone has 15 short sharp scenes – is reflected here for some of the battles, shown on giant tv screens and it certainly speeds the action along in a play that runs well over 3 hours.

Tunji Kasim is a cold, ascetic Caesar, immaculately dressed and with a penchant for expensive objets d’art, and Simon Godwin decides that this modern-dress version  should open with its end- Caesar orating over the dead Cleo. It gives a circular inevitability to the action, I guess. Tim McMullan is a no-nonsense Enorbarbus, the loyal lieutenant who changes sides and seems to die of a broken heart. His most famous speech of Cleopatra’s arrival “ The barge she sat in “ is delivered without all the poetry it often commands  but it’s a solid , honest portrayal.

But for me, even the appearance of a live wriggling snake to speed Cleopatra’s death couldn’t save the show. It lacks a vital spark and probably can slide back into the archives without too many tears.

You can watch it here;