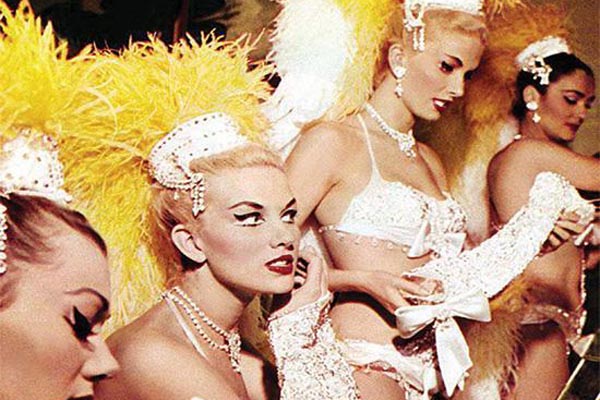 Me and the Girls is a paradox – a ‘new’ Noel Coward play.

IT is in fact a clever musical adaptation of a short story which the Master wrote on holiday in Jamaica, and published in 1962.

Coward’s dialogue- witty, precise, clipped and often stingingly accurate – shines out of his stage work. But not really out of this confection, created by Richard Stirling.

James Gaddas, well-known to TV addicts and soap fans, is the clapped-out cabaret singer/impresario, stuck in bed in his final days in a Swiss clinic, while he waits to die.

It’s not at first sight a promising idea for a light musical comedy play. And it only really works when the very many bed-based monologues to the audience give way to the routines of the manager’s six blonde bombshells – the girls of the title.

They play sax, violin, trumpet, cello and flute; they sing cutely; they tap their troubles away , and they are easily the best element of the show.

Gaddas makes us like his character George Banks, and it’s not difficult. He displays the dying man’s spirit of being totally at ease with his love of other men, tinged with a slight ache of not having seen his name in lights. He half-sings, half-speaks some of his songs and lets the girls take the strain of doing the dance steps but in If Love Were All, he really hits an emotional chord which soars above the rest of his performance.

All 6 girls are terrific in their little cameo roles but Josephine Brydges as the bouncy, ever-optimistic Sally and Nicola Bryant’s older, acerbic love-lorn Mavis take the acting credits.

Director/choreographer Stewart Nicholls moves the show on at a fair pace and he’s helped by the lack of any scenic effects except the central brightly-lit hospital bed. The dancing owes more to the end of the pier than the Palladium but this is supposed to be a tawdry third-rate touring group so it works well enough.

The musical interludes give us some of Coward’s best musical numbers – not least the laconic Sail Away and the innuendo-filled Chase Me Charlie and Would you like to stick a pin in my balloon daddy ?

When it features the  ‘tits and teeth’ song and dance numbers, the show really is delightful to watch and it would play more effectively in a smaller cabaret-style venue, but as a piece of Coward memorabilia, it is certainly collectible.

Me and the Girls plays at the Devonshire Park Theatre, Eastbourne until Saturday September 21 as part of a UK tour.