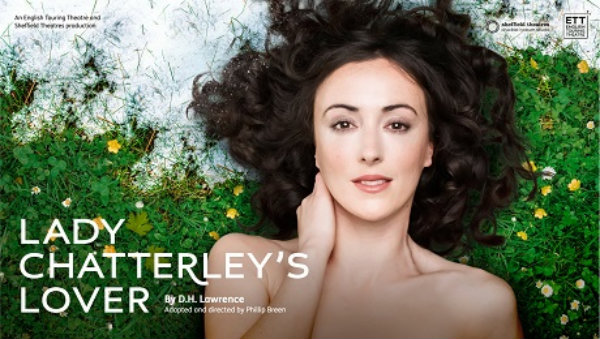 I’d forgotten what a powerful story Chatterley was and had relegated it to the back of my mind in the slightly naughty but nice category, without any real vibrant urgency or relevance to how we live today, a kind of nudy naughty Downton Abbey. This pristine new production adapted and directed by Phillip Breen surprised me.

This was superb acting and the evening opened and closed in the same simple but griping way. The cast is uniformly brilliant, well cast and engage with a fluid passion that keeps the narrative tension up through the evening but allows a real feeling of the flow of time. With a simple elegant minimalistic set which gave us the essence of the period rather than a heavy reproduction feel this allowed the emotional story to shine though. Breen’s using of the social changes being wrought along side the developing relationship between Chatterley and Mellor’s, is as minimal as the set, but used to highlight their power or lack of and also shows them as characters grasping for a new deal from the world after the shattering conclusions of empire, privilege and the industrial revolution has riven folk into bossed and boss’s. The heaving social change is back-dropped, but like the bird song in this production, all-pervasive and telling.

Phew, all this and they’ve not even got down to it, it’s a surprisingly in-depth analysis done with the lightest touch and the first half sped past.

The nudity and sex scenes are done with a deft grace as innocent and passionate as is deserving to these two tender lovers as they open their damaged selves to the possibility of another turn on the wheel of life, love and sexual relationships. Through the development of their relationship we see them challenge and change, embrace new radical ideas of the self and test them out, with constant ultra polite reassurance and seeking of affirmation with each other. It’s terribly terribly British and once you’ve got used to the Oh’Ecky Thump vs. the Talking Like Type Writers accents, it all settles down into something really rather good.

The book, famously banned for being obscene is opened and pared down here like a delicate flower,  pressed into its perfume and essence, but it’s still a challenging analysis of what happens when patriarchy, entitlement and brutality are challenged by honesty, trust and tenderness. Tenderness was Lawrence’s working title for Lady Chatterley and with it’s superb ending, as low-key, understated and beautifully wrought as the rest of the play – and the acting – this was a delightful ending to a wonderful night out.

All the characters are given equal weight to their emotional word and although the gravitational nexus is Chatterley and Mellor we see and hear their worlds and those of the people they live and share their lives and spaces with. Complex, honest and with passion these shattered bruised people, all having been lost and broken by the horrors of the Great War trying with as much British stiff upper lip to move on, and make the world a better place.

The audience paused slightly before giving the cast a superb applause, it’s that pause they do when then realise they’ve been witness to a seriously good play, with some excellent acting and now it’s all over and they have to go back to the real world.

I walked into the Theatre Royal, slightly cynical, wondering why I was  going to see a period romp and left with my heart open, my mind engaged and the thought that hope is aboard in the world still.

Hedydd Dylan as Lady Chatterley and Jonah Russell as Oliver Mellor’s spend a lot of the time naked in the play, it’s entirely without prurience, natural, nude and dignified and it’s pleasant to see such a torridly abused story refined to something far more sensual, experimental and human.

Well done all round, English Touring Theatre and Sheffield Lyceum Studios should be congratulated on the quality of this sublime production.