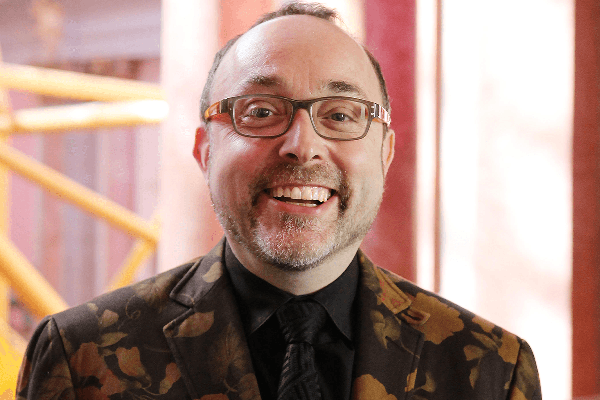 West  End and Broadway singer/composer/orchestrator Jason Carr has accompanied wonderful Musical Theatre divas like Maria Friedman and Lorna Dallas but for  Hope Mill Theatre’s Turn On Fest he streamed his inner and outer queerness in a delightful evening of favourites and newbies .

His opening medley is a clever concoction of songs with the word gay in their lyrics – ‘I just wanted someone to be gay with …. Keep it gay, keep it light….I’ll be seeing you in everything that’s light and gay… I feel so gay in a melancholy way..I feel pretty and witty and gay..Glitter and Be Gay…” – you get the idea as he tells us: “ now you know what kind of evening you’re in for “.

He recounts his first gig was a Coward/ Porter evening at the Barbican and the wonderful Fenella Fielding sang a double entendre song from Valmouth  – Only a Passing Phase ,  where the singer moves in sexual activities from gardener to plumber to pheasant beater to footman  to sailor to stoker . Perfectly made for Jason ‘s style .

In the Coward song Matelot, he admits the lyrics are opaque  as they had to be at the time but the song was written for Coward’s male lover  – it’s sad, fun, elegiac and Jason’s light voice just touches the notes and moves on.

The show has many surprises – like the work of  queer composer Roger Edens , a much-ignored songwriter who wrote for Ann Miller in On The Town – Find Me A Primitive Man – funny, rude and in this version with a great virtuoso piano interlude.

And there’s another queer unknown Hugh Martin, who wrote Meet Me In St Louis for Garland . Jason gives us what he calls his coming out medley – The Boy Next Door, and I Like Men. And another Martin gem – the musical version of Blithe Spirit – High Spirits , with its beautifully crafted My Home Sweet Heaven, full of witty, clever rhymes

Jason’s next idol is “ the undisputed homo of Broadway “- Larry Hart  – the poet of unrequited ( and unacknowledged ) queer love in My Funny Valentine and Spring Is Here , and Bewitched, Bothered and Bewildered ,  with its great line “ horizontally speaking he’s at his very best “.

Jason tells us he was 19 and not out when he went with his family to see La Cage Aux Folles in the West End and in 2007 he worked on the revival and gained his 2nd Tony nomination. His heartfelt medley of Look Over There and Song On The Sand is just perfectly pitched.

And then he gives us his own compositions ,  including Looking For a Bear , a  delightfully silly song by a French trapezist  , and Universal Love – with its lyric  “ let us take each other by the hand “ .

He confides that at 35 he was reconciled to be single but he has now spent 18 years with his boyfriend  and so he dedicates You Are The Best Thing That Has Ever  Happened To Me  to him. His nostalgic finale includes We Kiss In A Shadow with its pointed  lyric “ our evenings are few and over too soon.. we speak in a whisper, afraid to be heard “. It’s complemented by Nowadays from Chicago with its “ there’s men everywhere “.  And we end with another Roger Edens classic, funny, outrageous gem “ Think Pink “. As Strictly’s Craig would say “ Fab-u-lous darling”.

Other Turn On fest events at hopemilltheatre.co.uk