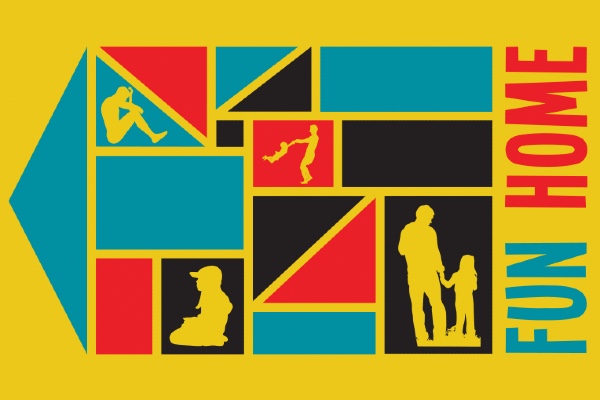 Alison Bechdel’s graphic novel about growing up a small-town lesbian with a closeted gay father doesn’t sound like lockdown fun, but this enchanting musical based on her book is absolutely a delight, if a very dark one.

With music by Jeanine  Tesori and books/lyrics by Lisa Kron, this true story is gripping from its opening – not a big brash Broadway extravaganza but a subdued chamber piece, full of peacefulness, angst, love and adolescent longings.

The creators have hit upon the idea of having the older Alison (Darrin Smith ) onstage mostly watching and commenting on the action , while her earlier  self is portrayed as  a college student, and a very young girl, respectively by Hannah Starr and Stella Rose Hoyt.

It works wonderfully as sometimes the three ages of Alison are able to complement each other in the growing irony of the storyline. Stella is stunning as the youngest, culminating in an endearing romantic song about her first awakening to her sexuality , when she encounters a butch delivery woman in “ Ring of Keys “.

Rob Lindley is an authoritarian father-figure, a teacher and funeral director,  who can’t be contradicted yet he betrays his inner pain at being a gay man who can’t escape  to happiness. As he tells his “out” daughter towards his tragic end, “ it’s harder when you’re older to begin “.

The show, seen here at the Victory Gardens Theatre, Chicago and running barely 90 minutes, is multi-layered and there are delightful moments like those when Alison is suddenly attracted to her first real love – fellow college student Joan, played with head-on comedy  by Danielle Davis .

McKinley Carter plays the wronged wife – a talented actress and pianist, reduced by the despair of  a totally hollow marriage to midday drinking.

If this all sounds too heavy for you, don’t think so: the score bounces along and the two young Alisons are an absolute treat to watch and hear. The show has great tunes , and if ultimately its tragic strand is important so too is the portrayal of lesbian self-awareness and worth. It was the first mainstream Broadway show to deal with an adult lesbian theme and guess what, it won 5 Tonys. There was a short-lived London production in 2018 at the Young Vic.

It needs to come back to the West End after lockdown, before Jake Gyllenhall, who’s bought the film rights, makes his movie of it. Oh and the title? Well it’s the ironic family abbreviation for their funeral home business.