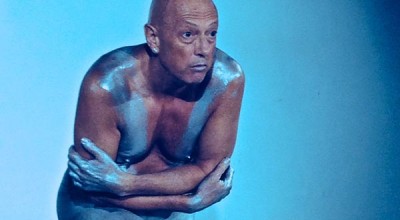 As well as being our most celebrated dramatist, Shakespeare was a prolific story-teller. In Theatre North’s Mirando, the Gay Tempest, which has just finished a run of performances at Brighton Fringe, Martin Lewton’s one man show brings Shakespeare’s play to new life through a remarkable tour de force of storytelling and physical acting.

The performances were staged in a reception room of the terraced house in Kemp Town which is home to Lewton and his partner, Andrew McKinnon, who directed the piece.  Apart from some coloured LED lighting the design is completely stripped back, much like Lewton himself, who remains completely naked throughout the duration of the performance.

In the absence of props and costumes, Lewton uses his naked body as a tool for telling the story, differentiating his many characters through tone of voice, manner of gait and small, subtle gestures here and there. And like Prospero, Lewton makes the most of his significant power over language and artifice to transport his audience and achieve the sense of magic that is central to the play.

At the heart of this gay imagining of the story, Lewton’s Prospero uses his mysterious powers to bring together Mirando, his son, with Ferdinand, the son of the King of Naples, who had conspired with Prospero’s brother Antonio to usurp and exile him.  The two sons fall in love, and in fashioning their betrothal Prospero restores justice and order to the world after 12 years of injustice and exile. With the gay marriage secured, Prospero breaks his magic staff and relinquishes his magical powers.

Lewton’s storytelling is boisterous and compelling throughout, but also deeply touching, especially in the central love scene between Mirando and Ferdinand. But while the sons’ marriage restores order and brings justice and resolution, it also results in an end to magic, and there is perhaps a suggestion from Lewton that although equal marriage has brought us equality, it is also another step towards making our lives more mainstream, less different, and maybe less magical for it.