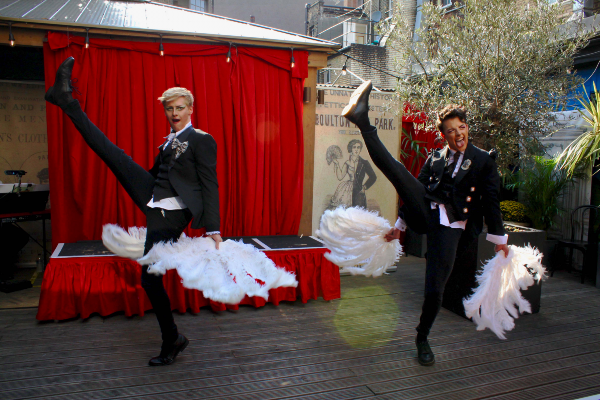 Hooray,hooray, hooray: live theatre has returned to London and with five-star magic. Ok it’s in a small garden behind the enterprising Eagle bar in Vauxhall  but this is a wonderful evening of comedy, cross-dressing and medical examinations!

From its opening bouncy song and dance number “ Sodomy On The Strand “ you know this is going to be high-octane fun with a serious underlying streak and it’s shock ability level is high. Camp but high.

The story is true and straightforward – two young men who dress as women for theatrical purposes find it hard to take their dresses off when they are out and about on the town, especially at dodgy establishments like the Holborn casino  where they go to parade and dance with men. Their behaviour leads to a famous long-draw out court case and their eventual acquittal.

Tv Taggart creator Glenn Chandler has produced a book and lyrics that are racy and funny and Steven Dexter’s deft direction never lets the pace slacken during its 90 minutes.

There are some delightful little tunes by Charles Miller  – especially He/She Ladies and there are genuine moments of affection bewteen the “ ladies” and their long-suffering male admirers. I imagined if the Boyfriend’s Sandy Wilson has been a sked to ewriote the Rocky Horror AShiw this is pretty much what he would’ve  come up with.

Mark Pearce is a general filler-in of walk-on parts and clearly has acquired several diplomas in the art of coarse acting.

Alex Lodge and Joaquin Pedro Valdes are  energetic and highly likeable as the main two gentlemen admirers who eventually abandon the he/she ladies after their court victory .

It’s terrific fun in a sun-filled garden and its serious message about identity and freedom to be what you want to be will make it a memorable show which oils easily become a cult musical in its own right.

And a word about the Eagle bar in whose garden it’s staged . They have pulled out every stop top make the evening a pleasant  one for both audience and cast, and three cheers tho them for that. Let’s hope for more live theatre in the weeks to come. We and our many theatre professionals deserve it.

The show runs at various dates in August at the Eagle, 349 Kennington Lane – ticket information : fannyandstellamusical.com