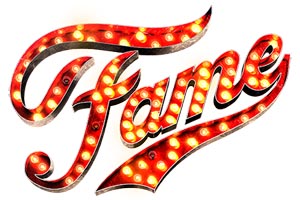 There was a palatable buzz in the brand new and very comfortable seating of the Congress Theatre for this touring production of Fame the Musical. But then, the opening number thundered in with very loud amplification making some of the singers fuzzy and quite a few lighting cues missed failed to light up the sky like a flame!

There was some problematic messaging going on too, a very vulgar early song to ‘set in context’ the sexism of the times, but it failed to be anything but a smutty hard-on wink, wink song. Some token racism and exploration of privilege was a welcome return to the Original Fame premise of challenging intersectional story-lines and serious emotional commitment, but then failed to go any further. Later, the same character after calling a woman a ‘bitch’ and not challenged on his behaviour, goes on to sing a song of triumph and is not called out on his misogyny or toxic masculinity.

Then there’s the running joke of the ‘is he, is he not gay’ character who turns out, in the final cloying love duet, to be not gay which means all the previous stuff about his gayness were jokes. Seriously, I mean, seriously………. I’d bailed long before this and had started playing cliché bingo with it.

The costume was all over the place; only one pair of very thin leg warmers was apparent, ruck sacks from H&M, etc.  Even the static set, clever on first sight to suggest an American year book was distracting by the first act and the images seemed to be a decade or more out in dress and hair, I checked later; they were. The characters psychological drive and development is dismal, one line for most of them. One line.

Mica Paris as Miss Sherman gives us the stand out moment of the night, with a perfect rendition of These Are My Children which pulled all the right musical levers, giving us all the emotional range of that superb voice of hers, but she alone was not enough to raise this mechanical musical mehh up off the ground. Her brilliance threw a hell of lot of shade on the mediocre material this superb cast were forced to work with. Fittingly enough the final encore song gave the audience what they had come for, and showed that when given strong enough material and lyrics this cast could shine.

The cast, are excellent – they sing wonderfully and dance well. Jamal Kane Crawford when allowed to gleam, gives us a superbly athletic performance and they all generally fizz with energy and excitement.

It’s the pro’s behind this who let them down, the two dimensional choreography, the lack lustre song choice, banal lyrics, the bizarre lack of any real narrative arc and some dodgy dated inclusions which don’t work.  Characters quoting Gone with the Wind rather than Indiana Jones and the Temple of Doom, the dance hinted at Katy Perry rather than Jackson’s Thriller. One wondered if the creative director and producer had even watched any of the original series, the audience certainly had.

I moved in the interval up to the circle, as the sound was too loud in the stalls, and although the acoustic experience was slightly better and the second half promised much, it again didn’t ‘ride your heart ’til it breaks’.  I overheard some comments from other audience members during the interval echoing my thoughts about the unbalanced amplification.

Fame holds a special place in the hearts of many people, both TV series and film excelled in exploring the complex emotional lives of young people working hard against all the odds to follow their dreams. This show, although technically good and blessed with an obvious talented cast, failed  to engage on any emotional level, only scored once or twice and was much, much less than the sum of its parts.

My companion, a big Fame fan, left unsatisfied, commenting there were not enough dancers on stage to fill the loo,  although she was pleased that Mica Paris and Stephanie Rojas (as Carmen) had followed through on the promise of high energy gripping entertainment and enthralled us with their stand out songs.

“Baby, look at me

And tell me what you see

You ain’t seen the best of me yet

I’ll make you forget the rest. “

The Congress Theatre itself was a joy to explore, fully refurbished, comfortable seating, reasonable prices, friendly informed staff, probably the most accessible theatre in the South East and with a real commitment to inclusive ideas around accessing space. It’s a triumph of what can be done when vision, passion, and some substantial investment is made in ageing infrastructure. The Congress is now set for the next phase of its life; let’s hope some of the entertainments offered can live up to the high bar this superb venue sets.