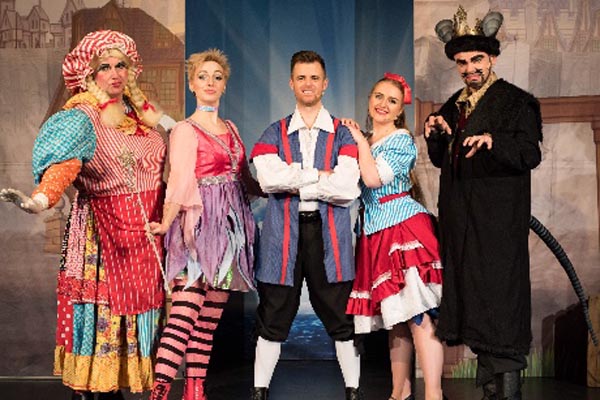 This year it seems that Dick Whittington is making panto headlines, with the all-star spectacular at the London Palladium and the controversial John Barrowman/The Krankies’ production in Manchester.

But at Shoreham’s Ropetackle Arts Centre panto producers LP Creatives have eschewed celebrity or stunt casting in favour of a quintet of professional actors, supported by a bevy of local talent.

Now I must admit I was a tad trepidatious seeing a panto is such a small venue, as I’m used to being lost in the crowd in a big red velvet and gold gilt proscenium arch theatre, and I wondered how the studio environment at the Ropetackle would work. But work it did, as in a novel use of the flexible seating, a large matted seating area was situated in front of the stage allowing the little uns the opportunity to get right up close to the action.

Not sure if this typical of all versions of Dick Whittington, but the first half is set in London, as Dick (Rob Thornton) and his cat (Kate O’Neil) find employment with Alderman Fitzwarren (Spencer Owen) and Dick falls in love with his boss’s daughter, the delightful Alice Fitzwarren (Lucy Robins).

However, King Rat (Aaron Charles) also has his heart set on winning Alice, and sabotages Dick at every turn, but Fairy Bow Bells (Thomasin Lockwood) is always close at hand to foil his wicked plans. The second half is set at sea and in Morocco where Dick and his fellow shipmates find themselves shipwrecked and captured. But not too worry, his trusty cat rids the city of rats and with a fortune in gold, Dick returns to London where he becomes Lord Mayor and marries Alice.

The scale of the show is small, with simple backdrops to represent the four settings, minimal props and costume changes, except for the dame, Sarah the Cook (David Lambert), who sports a range of brightly coloured costumes and wigs, including one pun-tastic one (I do hope they received some nice product placement sponsorship!).

The script by Tom Beard is witty with Fairy Bow Bells and King Rat speaking predominantly in rhyming couplets, and Alice in increasingly ridiculous cockney rhyming slang, which is helpfully translated for us!  And it was lovely to see and hear Lambert and Thornton carry off the complex ‘Who lives at number 1, What at number 2 and I’m Not Sure at number 3’ routine with such a aplomb.

Thornton’s background as an entertainer at theme parks, holiday camps and cruise ships was evident; as he played, the central role of Dick Whittington was an easy charm, interacting well with the children and grown-ups alike. But, also with a slight nudge and wink to the adults in the audience when it came to the inevitable ‘dick’ jokes.

These ‘dick’ jokes frequently relied on exacting comic timing, which Lambert time and again demonstrated. Lambert made a very warm-hearted Dame, and carried much of the heavy lifting when it came to the show’s comedic elements. Robins had a strong singing voice, which she used to good effect in her solos and duets with Thornton. Aaron Charles seemed to be relishing his role as King Rat, and Thomasin Lockwood did the best she could with the underwritten Fairy Bow Bells.

Two 14-year-old actors were in the cast, Spencer Owen seems to be firm Shoreham Panto favourite as this was his sixth panto, cast as Alderman Fitzwarren in the first half and the Sultan in second Owen displayed a confidence and maturity that will stand him good stead later on.  Dancer Kate O’Neil played the non-speaking role of the ‘cat’, relying on movement and gesturing to convey emotion and plot development.

The panto was directed by Quintin Young who has a long list of pantos in his credits, and within the constraints (physically, financially, technically) of the scale of production, demonstrates an understanding of the genre and audience expectations at a venue such as this.

The show’s finale was the Tony Power’s song Christmas Time with You which he has donated to the production as part of the panto’s support of  the charity Cancer is a Drag.

I saw the second show in the run, and there were some technical and pacing issues, which I am sure, will be quickly resolved. If you are looking for small-scale panto with a likeable cast, then do consider supporting the Ropetackle.

It’s not big, it’s not flashy, there are no star names, and you will probably have seen better, but it does have plenty of heart. Ideal for a child’s first panto, or for those who want their ‘dick’ jokes delivered with a little class.

Dick Whittington and his cat! is a the Ropetackle Arts Centre until December 31, 2017