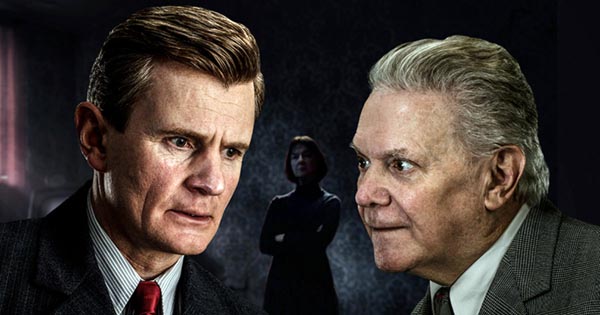 One of the certain facts of the universe is that everything is uncertain. It’s a physicist’s paradox – alongside the fact that the one thing we can’t see is ourselves seeing others.

MICHAEL Frayn toys with these ideas, like a cat with a ball of wool in his 1998 play Copenhagen.

What they discuss will literally blow the world apart – or will it ? Frayn’s intention is to show that what we look back on in our past is shaped by what has happened since, and that the present – whatever that may be – instantly becomes the past.

There are many explanations of incidents and the dilemma is to find the true one – whatever truth may mean.

Charles Edwards plays Heisenberg like an arrogant, petulant, self-important lost child, who seeks to be loved and recognised.

Paul Jesson as Bohr – his senior by 20 years – seems benign, reasonable but equally prone to angry outbursts when his theories are challenged. In between them, Patricia Hodge as Mrs Bohr is an all-knowing all-seeing icicle cold and sharp critical commentator, firmly taking sides against Heisenberg whom she believes to be aiding the Nazis to build an atomic bomb.

The play asks many questions. On the surface, it is asking why Heisenberg travelled at great personal risk to make the visit. Bohr constantly wonders this too and as each carefully crafted explanation is revealed, Bohr makes the play re-wind and sends Heisenberg back to the drawing board to produce another draft of events as if he were writing a research paper.

It’s a clever device but Frayn allows the form to run away from the content at times, and he slips into allowing dense scientific theory to dominate the play’s lack of action.

This is ironic because Bohr keeps telling his collaborator that their earth-shattering theories have to be capable of being expressed in plain language.

In this Frayn sometimes fails his own test.

But for me, the real question at the heart of the play is about the moral implications of scientific research, and where the duty of the discoverer lies.

Heisenberg , despite his best endeavours, or maybe deliberately because of them, fails to make an atom bomb. Bohr, the peacemaker, goes to the USA and helps invent the trigger for the bomb which killed 100,000 innocent souls at Hiroshima.

All three actors are outstanding in their very different characterisations, and their physical gyrations round the empty stage mimic the random movement of the particles they so love.

It’s hard work for an audience but there are glimpses of humanity among all the cold calculations. Charles Edwards moving account of his return to war-ravaged Berlin is particularly poignant.

Copenhagen runs at the Minerva Theatre, Chichester until September 22.