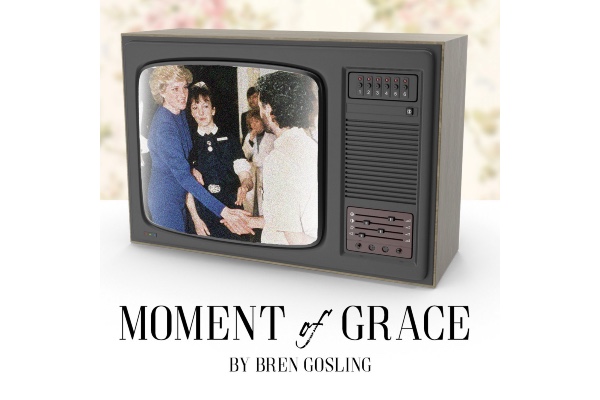 I was working on the Government’s first national AIDS awareness campaign in 1987 when Princess Diana made a landmark visit that awoke the whole nation.

She visited the first AIDS unit at the Middlesex Hospital and in front of the cameras shook the hand of a dying patient, without the Royals’ customary gloves on her hands.

Bren Gosling has recreated that hour-long visit , partly from archive material at the National HIV Story Trust , who are joint associates for his production of Moment of Grace.

Three actors, Andrew Paul, Lucy Walker-Evans and Luke Dayhill show us three very different but interlinked characters bound up in the day. Lucy is a nurse on the AIDS ward, full of apprehension , energetic, devoted, deeply caring but also worried of being “ found out “ to work where she does – she even fears she may be evicted from her flat because of the stigma.

Andrew, hollow-eyed, edgy, but very smiley is a patient destined to meet HRH. He too leads a secret life – Neither his workmates nor his family know where he is or what’s wrong with him.

And initially most enigmatic is Donny, a middle aged homophobic testosterone-filled fireman who seems to have no connection to the main story.

But ofrcourse as this modern Greek tragedy unfolds it’s finally all too clear what  Donny and his unseen wife’s connection is to another  character , an unseen hero of the piece.

The three actors filmed themselves in isolation and the separate monologues work really well to give us different perspectives of the day but also of the tragic background to the story.

A new generation today bemoaning the lack of a real Brighton Pride might not fully grasp the enormity of what happened to these people’s  lives and many more like them – the public ignorance and hatred, prejudice and fake news. But more important the real pain and fear of being publicly exposed and blamed for the epidemic , which had no treatment and which then seemed possibly to be going to overwhelm us.

Not to spoil the storyline, there is catharsis of a sort for  some of the characters and their unseen friends and family, and you’re left with a feeling of just how much devotion the NHS has always possessed, and that’s a salutary reminder in these lockdown times.

All three actors give honest, emotionally-charged performances that, despite the subject matter, are a joy to watch.

The play , directed remotely by Nicky Allpress, and produced by Backstory Ensemble, is on the Actors Centre website for a small charge until 9 August. It’s a compelling must-watch.