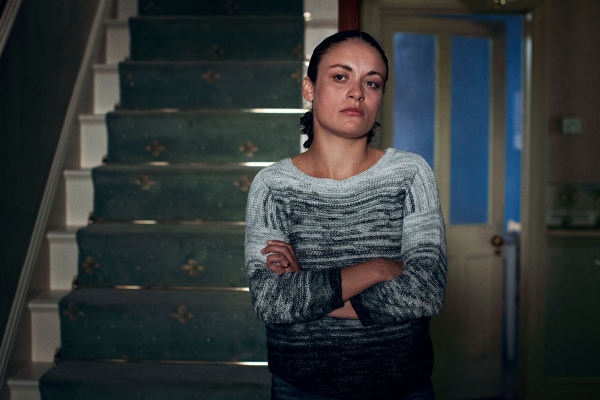 Alan Bennett’s 12 monologues in this new incarnation on BBC TV are altogether darker than I remember them . In Playing Sandwiches Lucian Msamati is gripping as Wilfred , an easy-going park gardener with a terribly dark past that you know from the start will catch up with him.

Ofcourse his crime of paedophilia is unforgivable  but it’s his matter- of – fact ness, his day-to-day kindness that is truly shocking. We actually like many aspects of his character. Is Bennett telling us not be wholly judgemental, or that life is complex – certainly not telling us paedophilia is acceptable , surely? You decide.

Martin Freeman takes on the role played by Bennett himself first time round in  A Chip In The Sugar. Graham is saddled with his mother who’s descending bit by bit into dementia. When what my Aunrie Gladys – also from Bennett’s home city Leeds – would have called mother’s ex “ fancy man” turns up again after 52 years , there’s going to be sad and damaging humour.

Some of the humour is from the dependency of Graham, partially caused by mental illness but Bennett doesn’t tread too far in  that dangerous direction. Theroux famously coined the phrase about men living “ lives of quiet desperation “. Bennett has a wide array of both men and women who fit that bill.

The Outside Dog, starring Rochenda Sandall ,  is altogether a darker and fairly humourless portrayal of a woman coming to terms with the fact she may be living with a serial killer . It’s an electrifying performance as the truth gradually dawns – but what will she do about  this knowledge?

In Bed Among The Lentils , Lesley Manville is  the alcoholic wife to the local boring vicar  – an absolute mastercalass in under-acting and perfect sharp, witty, bitter comedy. Manville never puts a foot wrong and is brilliant in her/ Bennett’s acerbic and bitchy dissection of the church flower arranging ladies. Vintage  stuff and again with a marvellously joyous twist in the tale.