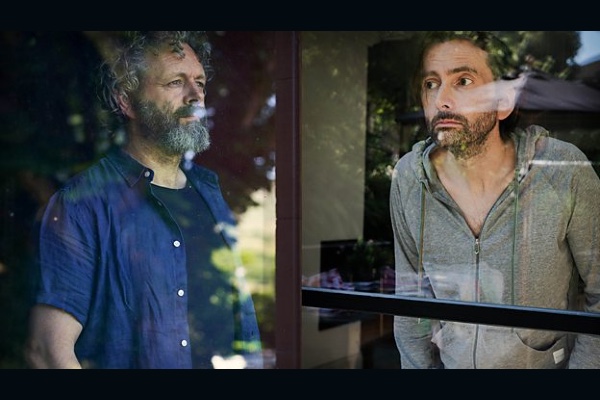 Simon Evans has written and directed a six-part comic masterpiece that perfectly captures our lockdown mood. Staged, starring David Tennant and Michael Sheen – or the other way round – is brilliantly filmed, timed and acted.

Evans is the feckless and cowardly director of a stage production of Pirandello’s classic  comedy Six Characters In Search Of An Author, which has been halted by Covid 19.

His single good idea is to rehearse the play in lockdown with the two main actors in their own isolated homes via Zoom.

What can possibly go wrong ? Well, viewers, everything. Simon hasn’t accounted for the two actors’ egos, their temperaments and struggle to cope with being at home 24/7 with wife and kids. Apparently the best of friends, they get embroiled in argument after argument about whose name goes first on the theatre poster, about the accents they should use and behind his back, about the uselessness of their director.

On top of that Sheen discovers he was not first choice – which has never happened to him before, he claims. Worse still, the actor originally cast wants to resume his role now his commitments have eased. Enter Samuel L Jackson in a beautifully crafted four-letter-word diatribe.

Other issues also raise their heads – but I won’t spoil it if you haven’t viewed yet. Suffice to say there are further wonderful cameos from a right-on Adrian Lester and a cool, calm and outspoken Judi Dench .

It needs to be viewed more than once, so densely packed are the nuances, facial expressions and quick fire deadpan jokes. It makes lockdown worth it.

Staged is on BBC iplayer here