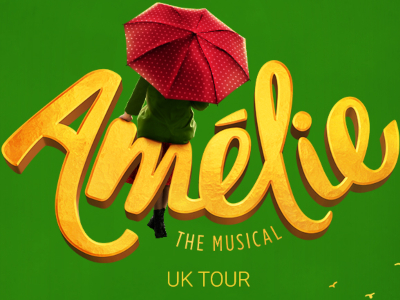 SO, a confession, I’d not seen the film, I like to go into these things uninformed, a musical should stand alone, proud and constructed with love and great tunes to work and shine.  I was thrilled from the tightly woven opening number, gripped by the carousel of musicians who whirled and played their way around the stage and moved by the wonderfully rich harmonics of the full cast ensemble singing.

My companion had seen, and loved the original film so was my touchstone for authenticity and was pleased that this kept mostly to the narrative of the film while still giving itself space to shine and grow in a theatrical live performance space.

It’s constructed by someone who obviously loves musicals, the protagonist’s journey whilst keeping true to the film’s original narrative having its own bursts of fantastic reimagined action and some excellent extra theatrical pieces thrown in. The music, although in the same style as the film, is original and well-constructed. Composer and lyricist Daniel Messe and Nathan Tysen working tightly together to make these songs hum, and radiate emotion, and with a large cast of strong singers doing tight and exquisite harmonies on stage this level of commitment to the message of the song, as well as the tune payed off big time.

The set is a noir Gallic delight, shifting, spinning and turning to suggest home, café,  metro/underground, street or cathedral, the colour palates and costumes are spot on, make up and soundscapes filling in the atmosphere perfectly and the lighting crew give us ambience and crepuscular style in abundance, this is a seriously well-polished show. There were some lovely visual jokes, lots of quick nods to the film, and the end of the first half, a superbly dark and surreal Elton John playing at the funeral of Lady Di was a laugh out loud delight of reimagined riotous campness. I’d like to list all the creative and technical crew who worked on this, as I was impressed on many levels, but you can check them all out here.

The narrative arc is honest, done with subtle delight and all the stage performers get a turn to shine, it’s a lovely ensemble show. Amélie is an oddly passive protagonist in many ways, and the narrative gives her the scope to develop while staying honest to her values, upbringing and oddly segued perspective on the world.  The musical constructs an engaging series of episodic moments brushing in and through peoples loneliness, distance from each other and the isolation that can create, it’s guided by the film’s narrative and also, through the joy of call-backs, reprises and reflection of songs and melody manages to bring to life the feeling of the fundamental interconnections of all things, and especially of all people.

Audrey Brisson as Amélie is touch perfect, petite, sharp, delicate, spontaneous, terrified, thrilled and open to her huge imagination. Her voice fills the space and reflects the characters simple clean strength and tenderness. I was enthralled by her performance the choreography of the stirrings of love done with engaging honesty. My companion felt her depiction of this much loved character an empathic frenzied triumph. The whole cast is simply great here, almost all of them playing instruments as they sing, dance, whirl and play, it’s a superbly choreographed piece, which – although constantly moving- gives time for reflection, contemplation and the important melancholic sadness of some of the characters to unfold.

Special mention to the puppets from Dik Downey, giving us a poignant younger Amélie and a riotously funny Gnome in the second half.

Was there anything wrong with this beautifully wrought show? Hmmm, I had the tiniest issue with the Allo’ Allo’ accents interspersed with plenty of actual French, but everyone committed completely to them and most even hit a decent Parisian accent, there was some rare muffling of some of the rather superb lyrics because of the accents, but that’s a very small observation of what was a superbly put together piece of musical theatre.

Listen very carefully, I shall say this only once;  Amelie is a superbly entertaining, heart-warming and thrilling musical, ticking all the boxes, in all the right ways and leaving you with a huge warm smile as you head home.

The Devonshire Park theatre is such a lovely space, and adds its warm comfortable charm to this superb show.

To book tickets or for more information, click here: