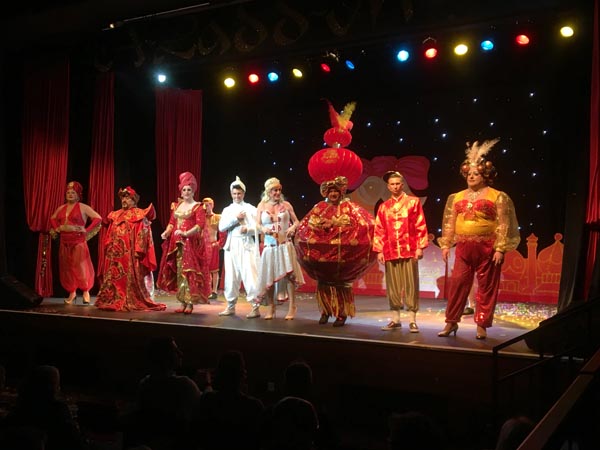 The Alternative Panto A LADD IN, returns for a second year to the comfortable surroundings of the Sallis Benney Theatre with a production perfectly judged for an adult audience and something you can take your favourite granny to.

Current and relevant with loads of brilliant gags, Andrew Stark’s script never takes the route of being gratuitous or offensive, rather it brilliantly highlights the panto’s much-loved characters and allows them room to develop during the show.

Set in Brighton and the Isle of Wight, rather than China, the storyline of A LADD IN is well rehearsed and does not need explaining here. However, this production is first and foremost a great ensemble piece with some inspired casting.

Jason Lee as the rapping Willy Wankey is on the money all night. Jason sings and acts really well, has great comic timing and creates a really loveable character with some memorable lines.

His mother Widow Wankey played by Jason Sutton (Miss Jason) has all the qualities of a fine traditional Panto Dame. Every time Jason arrives on stage he creates a little happiness and reminds me of so many famous panto dames I saw in my youth, including the great Dockyard Doris.

The show’s romantic interest is provided by Allan Jay playing Aladdin and Dave Lynn cast as the beautiful and ‘young’ Princess Dazz Lynn. Allan looks great, sings great and cuts, with finesse a traditional romantic lead. Dave Lynn’s performance is disciplined, very funny, at times self-deprecating and despite the obvious gap in ages of the performers, the pair are able to suspend our belief and make for a really convincing pair of lovers. Their flying carpet sequence makes for pure panto magic, giving both performers the opportunity to reveal their comedy credentials.

Stephen Richards (Lola Lasagne) glorious as Ivana Tramp, struts the stage like a lioness waiting to pounce on an unsuspecting victim, barely pausing to take the next breath during his word-perfect delivery. The comic timing in his two handers with both Dave Lynn and Miss Jason highlighting just how accomplished all these performers really are.

A convincing villain is essential to all good pantos. Ava’A’Varda is played to perfection by Christopher Howard. His sweeping, Shakespearian gestures gets the audience on board from his first entrance and they continued to hiss and boo to the bitter end. An accomplished actor and singer his is the perfect foil to all the other camp performances.

Jon Hughes (Sally Vate) cuts a convincing and loveable Jean, (Genie of the Lamp) in his first appearance in the alternative panto while David Pollikett (Davina Sparkle), playing Pam (Slave of the Ring) provides some lovely Les Dawson ‘glum’ moments with his facial expressions.

Opening nights of new shows can be fraught with technical problems. Few here to mention and once the performers are over their first night nerves, I have no doubt this show will prove to be one of the better alternative panto productions of recent years.

A LADD IN is staged and directed by Quintin Young who played Buttons in Cinderella opposite David Raven in the first alternative panto at the Pavilion Theatre in 1989. He keeps the production moving along at a breathtaking rate and coaxes some fine and surprising performances out of his artists. His staging of the finale of act one brings much higher production values to the show as does the finale, complete with glamorous costumes.

Highly recommended for a good gay night out.

All bucket collections at the end of each performance and proceeds from the sale of the programs go to the LGBT Community Safety Forum, an established independent LGBT forum of eight elected, unpaid volunteers working with the LGBT Community to address and improve safety and access issues throughout Brighton & Hove.

A LADD IN runs until February 2.