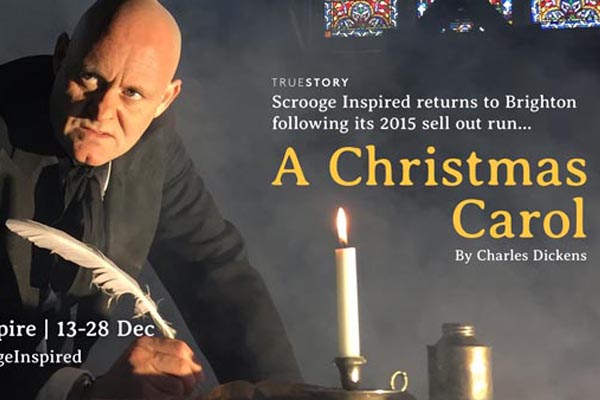 This is a one-hour truly immersive piece of theatre – audience involvement is a must during this hugely entertaining event.

So we have the chance to take part in  a snowball fight with the young Ebenezer Scrooge – after the cast hand out paper snowballs, and to dance up and down the beautiful former St Mary’s Chapel where the show is staged.  We can sing along with the cast when they go a –carolling and munch mince pies and quaff mulled wine.

Gary Sefton has adapted and directed this perfectly formed miniature version of Dickens tale of greed and redemption, and he plays the starring role with the Brighton based Truestory theatre group. Scrooge is depicted here as a bald cadaverous viper of a miser, but Sefton is equally adept at cooing like a baby and dancing like a teenager when he finally sees the light.

The staging is avenue style and all the highly talented cast make the most of the elongated space ad libbing with audience members as they pass us by.

The simple but highly effective special effects are stunning  especially when the long dead Jacob Marley emerges through a doorway covered in giant cobwebs  or when the Spirit of Christmas yet to come appears as a shrouded black towering figure more than twice the height of Scrooge.

The show is truly joyous and at times heart-rending, it’s vivacious, funny, quick and full of energy. Wrap up well when you go as the chapel feels as cold as the winter air outside.

Don’t miss this Christmas treat – you will love it.