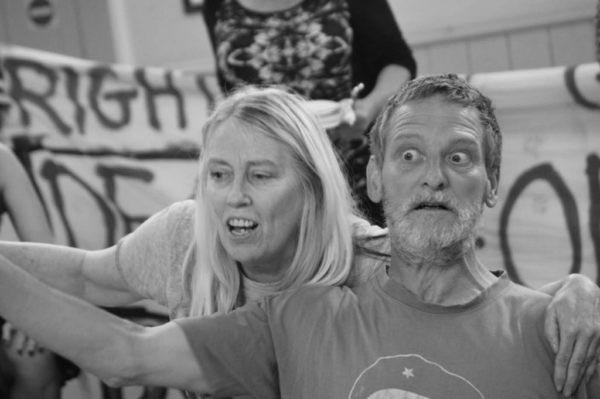 POET John Faust is suicidal. His benefits have been stopped without warning, the bailiffs are due to evict him, his dog is in the vets dying, his car needs a new clutch, and he can’t finish his poetic masterpiece while the voices inside his head torment him.

In despair, John throws himself off Beeston Bump, Norfolk’s highest peak, clutching The Tragic True Life & Deserved Death of a Benefit Scrounger by Himself, but Lucifer won’t let him drown because she loves his book and wants a bigger part.

A Very Queer Nazi Faust by poet, artist and disability rights campaigner, Vince Laws, highlights the plight of disabled people under the current government, described as ‘economic murder’ in the British Medical Journal, and as ‘a human catastrophe’ by the United Nations.

The performance contains adult themes and language, suicidal thoughts, DWP Deaths, Lucifer, The Naked Abseilers and poetry, but no Nazis.

The are workshops every Sunday at Silver Road Community Centre, Norwich, until the performance at Norwich Arts Centre on Wednesday September 12. The workshops and performance may be photographed, filmed and live-streamed.

Commissioned and supported by Unlimited, celebrating the work of disabled artists, with funding from Spirit of 2012. If you need help to take part, let Vince know, he’ll do his best to make it happen.

An artist with something to say, and fearless in saying it….. Marcus Dickey Horley, Curator, Tate Modern