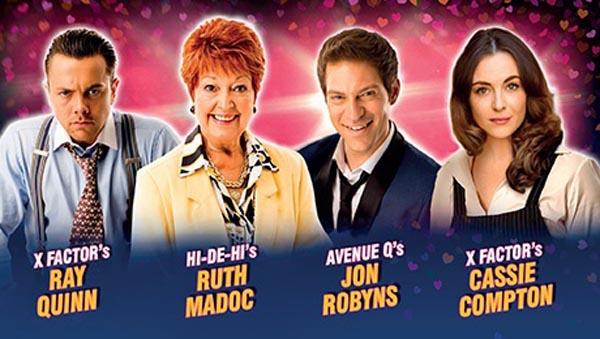 Smash hit Broadway musical THE WEDDING SINGER will celebrate their 200th performance when it opens at Theatre Royal Brighton on Tuesday August 29!

This 80’s musical will get you up dancing faster than your Dad at a wedding, is packed with songs which capture all the fun and energy of the Adam Sandler smash hit film.

It’s 1985. Hair is huge, greed is good and rock star wannabe Robbie Hart is New Jersey’s favourite wedding singer. When his own fiancée dumps him at the altar a seriously bummed out Robbie makes every wedding as disastrous as his own.

Can sweet natured Julia and her best friend Holly lure Robbie out of the dumpster and back into the limelight?  Or is he going to see her head off down the aisle with Wall Street bad boy Glen. Only Grandma Rosie seems to be able to see that Robbie and Julia are the couple that are meant to be.

Stephanie Clift plays Holly and trained at the Arts Educational Schools, London where she gained her BA Hons in Musical Theatre, graduating in 2013. Straight out of college she secured the role of Lisa in Mamma Mia! at the Novello Theatre, London. She played Susan in the UK tour of Crush and most recently, Audrey in the UK tour of Little Shop of Horrors. She has also appeared in series 2 of Broadchurch for ITV and BBC’s Christmas special of Call the Midwife.

Starring alongside Stephanie is West End and Musical Theatre star Jon Robyns who plays Robbie Hart. Most recently he starred in Legally Blonde as Emmett Forrest and in Sister Act as Eddie Souther; other theatre credits include Enjolras in Les Misérables, Spamalot, Memphis and Avenue Q.

He is joined by British singer-songwriter Ray Quinn as Glen who shot to fame as the runner up in ITV1’s The X Factor in 2006 and as champion of Dancing on Ice in 2009. In 2014 he won Dancing on Ice: Champion of Champions. His theatre credits include Danny Zuko in Grease (West End), Dirty Dancing (West End) and Legally Blonde (UK Tour).

The Wedding Singer 2017 UK Tour is Directed and Choreographed by Nick Winston. Set and Costumes are by Francis O’Connor. Musical Supervision by Sarah Travis with Musical Direction and Orchestration by George Dyer.

Lighting Design is by Ben Cracknell with Sound Design by Richard Brooker. Video Design is by Jack Henry James and Casting by Jim Arnold.