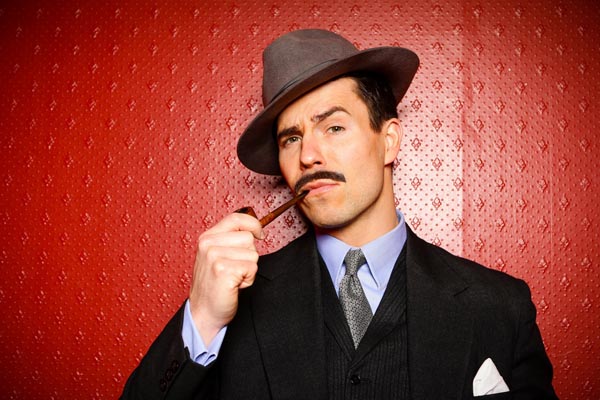 Jump on-board as the hilarious spy thriller and Olivier and Tony Award-winning comedy The 39 Steps comes to Eastbourne for a riotous run at the Devonshire Park Theatre this summer (July 25 – August 17) starring Oliver Mellor (Coronation Street). Based on John Buchan’s classic novel and Alfred Hitchcock’s film The 39 Steps is the perfect summer night out.

This comedy was a West End hit and now it’s playing a summer residency at the glorious Eastbourne playhouse under the direction of Chris Jordan and the creative team behind last summer’s smash show Return to the Forbidden Planet and of course Eastbourne’s famed pantomimes not to mention One Man Two Guvnor’s in Summer 2017.

Packed with wildly inventive stagecraft nothing has been cut from this hilarious and spectacular version of the spell-binding thriller, with legendary scenes including the chase on iconic train the Flying Scotsman and an escape across the Forth Bridge!

With four actors playing 139 roles led by Oliver Mellor as Richard Hannay whose innocent night out at the theatre results in a nationwide man-hunt! The remaining 138 roles, which include women, men, children and even the occasional inanimate object, will be played by the remaining cast of three – who will be announced shortly.

Oliver Mellor last appeared at the Devonshire Park in the acclaimed Dial M for Murder last year and previously in Original Theatre Company’s inventive Wait Until Dark in 2017.

But what is the secret? What or where are the 39 Steps? Who can be trusted? And more importantly – how are they going to recreate a chase across the roof of a moving train on the stage of the Devonshire Park Theatre?!

The answer to all of these questions, and more, can only be answered by buying a ticket from the box office – all tickets are first class (though the prices aren’t as terrifying as Southern Rails’ – and the service is definitely less likely to be delayed!).

When: Thursday, July 25 until Saturday August 17

Time: Evenings 7.45pm, matinees on Wednesday and Sunday at 2.30pm. No performances on Sunday and Mondays.

To book tickets online, click here: which now gives the option to print-tickets-at-home and choose your seat based on the views it offers.