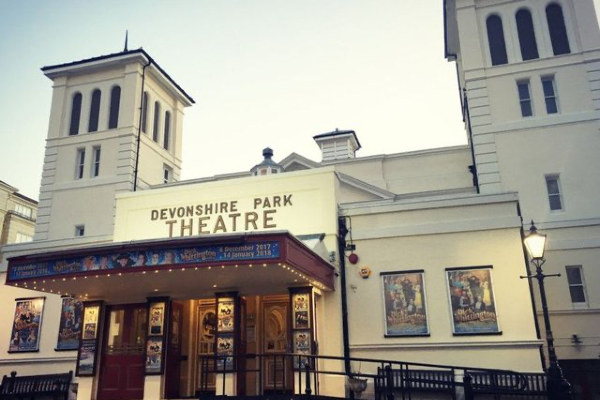 That iconic creator of Dame Edna, Barry Humphries shows the man behind the mask as part of a great theatrical season at Eastbourne’s Congress and Devonshire Park Theatres.

The London Philharmonic will be in concert with the genius Sheku Kanneh-Mason, playing Shostakovich’s Cello Concerto (20 February). Strictly dance stars Anton and Erin tread the boards in a spectacular show featuring the music of Elton, Tom Jones, Bassey and the Spice Girls (25 February). And March opens with the touring version of ABBA musical Mamma Mia! It’ll be the time of your life ( 1-12 March).

Griff Rhys Jones and Janie Dee star in the comedy An Hour And A Half Late ( 7-12 March), which is also presented in Brighton, so you’ve got double the chances to catch it. A new exciting take on the story of Frankenstein is at the Devonshire Park from 15-19 March, presented by Blackeyed Theatre.

Barry Humphries – The Man Behind The Mask brings the Dame Edna Everage creator to the stage as himself in what promises to be an evening of revelations and surprises. He’s on at the Devonshire Park on 28 and 29 April. Dallas legend Patrick Duffy and Linda Purl from Happy Days star in a mystery about a missing wife and an impostor in Catch Me If You Can (9-14 May).

Another act that’s been the rounds and still entertains massively – Fascinating Aida – are on at the Congress on 20 May, starring Dillie Keane, Adele Anderson and Liza Pulman – worth it just to hear Cheap Flights. And there’s another chance to see the stunning Six The Musical – a rocking romp of girl power at the court of Henry VIII (31 May-5 June).